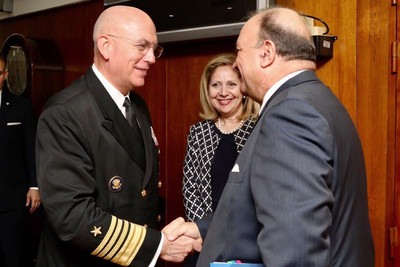 In 1988, Colombia looked like it was on its way to being a failed state.

Drug cartels operated with impunity. The rebel group the Revolutionary Armed Forces of Colombia — or FARC — controlled vast swathes of the nation and was working hand in glove with the drug lords.

Assassinations were so commonplace and brutal that a whole language developed around them. One particularly brutal way of killing was called a “Cartegena necktie.”

The nation looked like it was pitching into chaos.

But Colombia and the rest of the region have made tremendous progress since. Last week, Colombian President Juan Manuel Santos visited NATO headquarters in Brussels to further the nation’s position as the first Latin American nation to become a global partner of the alliance.

For 30 years, Colombian and U.S. officials worked together to bring the nation back from the brink and the sustained relationship across administrations in both countries has paid off, said Navy Adm. Kurt W. Tidd, the commander of U.S. Southern Command.

The admiral spoke to reporters at the Defense Writers’ Group this morning.

“If we stick together, we can have very successful outcomes,” he said.

Today, Colombia is “a modern, thriving, capable partner,” Tidd said. “The security challenges are still there, but they understand the challenges and they are taking the steps to continue to deal with them.”

Tidd called Colombia a net exporter of security in the region. He noted the Colombian military is working closely with Central American partners, to help them as they deal with their internal security challenges.

But the effort goes beyond just Colombia and Central America. “We have close partnerships with many capable countries across the region,” the admiral said. “What is not understood or well recognized is just how capable some of these countries are.”

Colombia, Peru, Chile, Argentina and Brazil “are nations I would stack up there with our very best partners in NATO,” Tidd said. “These are proud and capable militaries that have taken on broader security responsibilities.”

He noted that Uruguay on a per capita basis has the largest presence of United Nations peacekeeping troops.

Brazil has provided sustained leadership of U.N. missions in Haiti and Lebanon.

Colombian officers work on the staff at U.S. Southern Command. A Chilean general is a deputy at Southcom’s Army component headquarters in San Antonio.

“This year, in the world’s largest maritime exercise — the Rim of the Pacific — the maritime component commander … is a Chilean rear admiral,” Tidd said.

“These are countries that have game — they are serious, they are capable. All we have to do is continue to work together,” he said.