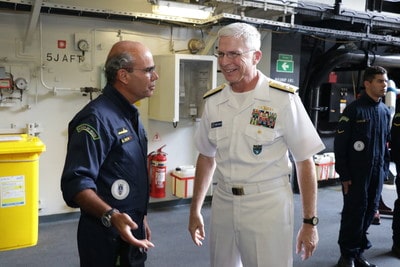 The trip was the admiral’s first to Brazil and Curaçao since assuming command of SOUTHCOM Nov. 26. Faller was accompanied by SOUTHCOM’s Civilian Deputy to the Commander, Amb. Liliana Ayalde, and Command Senior Enlisted Leader, Marine Sgt. Maj. Bryan K. Zickefoose.

During his visit to Brazil, Faller met with civilian and military leaders to discuss bilateral security cooperation with Brazil in support of regional peace and Western Hemisphere stability.

Brazil and the United States, the two most populous democracies in the Western Hemisphere, enjoy an increasingly close bilateral relationship, including in the area of defense, on specific areas such as research and development, information exchanges, training and education, joint military exercises, and commercial initiatives related to defense matters.

During his visit to Curaçao Feb. 13-14, Faller was hosted by U.S. Consul General Margaret Hawthorne.

Faller met with Governor Lucille George-Wout and Prime Minister Eugene Rhuggenaath, in separate meetings, to express appreciation on behalf of the United States for hosting the U.S. Caribbean Cooperative Security Location – and Curacao’s generous partnership and significant contributions in countering the flow of illegal narcotics throughout the region.

Consul General Hawthorne said “this high-level visit demonstrates the importance that the U.S. attaches to our cooperation with the Dutch Caribbean islands and reinforces the mutually-beneficial partnerships we have on a number of important issues.”

Faller also attended the unveiling of the USS Erie Memorial plaque at Koredor in honor of those who made the ultimate sacrifice in defense of our freedom. While serving as the lead escort for a convoy, the USS Erie was torpedoed on November 12, 1942 by a German U-boat, a few miles off the coast of Curacao.

In addition to Brazil and Curaçao, Faller has conducted official visits to Colombia, El Salvador, Guatemala, Honduras, and Trinidad and Tobago since assuming command.

(U.S. Embassy in Brasilia and U.S. Consulate General in Curacao contributed to this report)