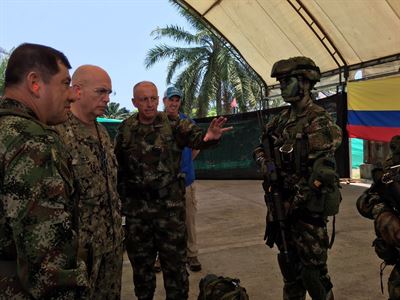 Fighting transregional and transnational threats requires building networks stronger than those that are keeping those threats in business, the commander of U.S. Southern Command told members of the American Chambers of Commerce in Latin America and the Caribbean at a luncheon in Miami yesterday.

“The global flow of drugs, weapons, people and illicit goods [is] the visible manifestation of powerful, networked organizations and groups,” Navy Adm. Kurt W. Tidd said. “You probably know them as cartels, gangs, drug trafficking and criminal organizations, violent nonstate actors, narcoterrorists and the like.”

These networks exploit the interconnected nature of the American financial, transportation and technological systems, the admiral said.

“Some networks smuggle desperate people from all over the world into our countries, where they may go to find jobs or refuge from conflict, … while other networks specialize at moving individuals with questionable backgrounds, worrisome intentions and possible ties to terrorism through the region and into the United States,” he added.

Some of these networks are globally integrated enterprises that rival Fortune 500 companies and have worldwide reach, Tidd said, and others dabble in activities such as cocaine trafficking, extortion and human trafficking. Others smuggle precursor chemicals into Mexico to make heroin and fentanyl, and some reap enormous profits by illegally mining gold in Guyana, Peru and Colombia, he told the group.

The U.S. government needs to find new ways to work together with its partner nations, allies, nongovernmental organizations, academia and the private sector “to build networks stronger than the ones that threaten the prosperity and security of our hemisphere,” said the admiral said.

“Security and economic prosperity go hand in hand,” he added. “We need to better integrate our economic development with our security and stability ones. We need to increase regional cooperation and share more information. We need to coordinate more effectively among and across agencies, departments and ministries, civil society and the public sector.”

Tidd also said that to stay ahead of transregional and transnational threats, agencies need to harness technologies that not only make them smarter, but also are better than those of the “not-so-friendly” networks. “And that’s no easy feat,” he added. “We talking about groups who constantly find new ways to transport their illicit products and conduct their illicit operations. As one expert recently noted, the one law these guys don’t break is the law of supply and demand.”

“These networks are pretty creative,” he said. “There’s nothing they won’t try. They’re building million-dollar submarines in the jungles of Colombia and Ecuador. They’re revamping old products and new synthetic drugs like meth and ecstasy. We’ve got to find a way to out-innovate a very innovative adversary.”

One way they can do this is by leveraging revolutions happening in commercial space and machine learning to transform how Southcom and its partners use nano-satellites and other tools to provide critical situational awareness of threat network operations, the admiral told the audience.

Visualization tools would help them better understand how these groups interact and how illicit funds move through the global financial system, he explained. Southcom and its partners also need to develop advanced data analytics of publicly available information to understand who is attracted to becoming a member of these groups and how these groups operate in the cyber domain, he added.

“These kinds of innovation partnerships aren’t just good for us – they’re good for U.S. and Latin-American companies,” he said. “They provide a platform for engagement in the region, drive economic growth and create jobs for all countries involved.”