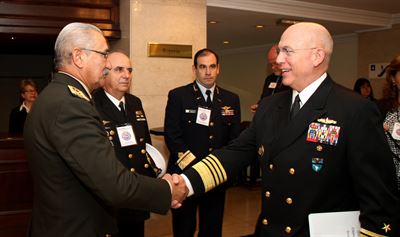 Global peacekeeping operations, transregional threat networks and the integration of women in military service were on the agenda for military leaders from South America, the United States and Canada, who concluded two days of meetings today at the historic center of Uruguay’s capital city for the annual South America Defense Conference.

The annual gathering in Montevideo was co-hosted this year by Gen. Nelson Pintos, chief of the Uruguayan joint staff, and Navy Adm. Kurt W. Tidd, commander of U.S. Southern Command.

The conference examined “the changing role of the military in the region,” the event’s central theme.

Pintos and Tidd addressed the participants and observers representing the 11 nations in attendance before the start of the conference’s briefings, discussion panels and meetings.

“With this rich exchange of experiences, … we will leave here with bolstered knowledge and a clearer understanding of what our role is in developing our armed forces for the current era,” Pintos told the group.

Borrowing from the past to underscore the historical ties the nations in the region have enjoyed for centuries, Tidd cited Gen. Jose G. Artigas, considered the father of Uruguay and leader of its independence.

“Our countries are intimately united, by both natural connections and shared interests,” he said, attributing to Artigas.

“This is as true today as it was more than 200 years ago, and as it surely will be 200 years from now,” Tidd observed.

After the welcoming remarks, the participants accompanied both leaders to the Plaza Independencia for a formal wreath-laying ceremony at the base of a 55-foot-high monument to Artigas.

Despite having a smaller defense force than most of its regional neighbors, Uruguay is one of the hemisphere’s biggest contributors to peacekeeping operations, with more than 1,300 troops and police supporting U.N.-sponsored peace, stability and observer-group missions in the Democratic Republic of the Congo, Haiti, India/Pakistan, and the Ivory Coast, according to U.N. peacekeeping statistics.

About 4,700 troops and police from the Western Hemisphere support more than a dozen such missions worldwide, including more than 2,200 who contribute to the U.N.’s stabilization mission in Haiti.

Paul Yorio, program manager for Southcom’s Global Peace Operations Initiative, updated the delegations on the command’s implementation of the program launched a decade ago by the U.S. State Department to provide security assistance and strengthen international peacekeeping capacity in support of U.N. peace operations. The initiative has since assisted with training for more than 36,000 peacekeepers from 12 Latin American nations.

Yorio said the initiative’s strategy was recently revised and the command’s lines of effort adjusted to focus on assisting partner-nations’ ability to deploy, maintain and sustain “critical enabling units” such as engineering, aviation, riverine and field hospitals, as well as the provision of specialized training required by the U.N., including counter-improvised explosive device, protection of civilians and gender integration.

“The global demand for peacekeeping remains at an all-time high,” he said of the U.N.’s need for trained units and forces, “and this situation is unlikely to change in the foreseeable future … given the increase in conflict globally.”

The discussion shifted from peacekeeping to transregional threat networks as the delegates transitioned to their chief regional security concern.

A Southcom senior intelligence analyst provided the command’s perspectives on the threat before representatives from Brazil, Chile, Colombia, and the United States joined a panel to further examine the challenge and share ideas on how best to collaboratively tackle it.

He listed transnational organized crime and terrorism as threats facilitated or enabled by the sophistication and interconnectivity of present-day transregional networks. Criminal actors using the networks, he said, are motivated by profits that can exceed those of large corporations.

“From a global perspective, illicit activities are estimated to range from 20 to 30 percent of the total global economy and generate estimated profits totaling over $3 trillion per year,” he said. Such considerable profits, he added, give criminal organizations a degree of control and influence that has a corrosive effect, undermining the rule of law, democratic institutions and stability in the countries where they operate.

Though terrorist attacks in the Western Hemisphere’s southern continent over the past two decades have been attributed to politically motivated groups such as the Revolutionary Armed Forces of Colombia — known by its Spanish acronym, FARC — or Shining Path in Peru, car bombings in Buenos Aires in 1992 and 1994 that killed more than 100 people are believed to have been carried out by Middle East-based terrorists.

“As we move forward, successful illumination and degradation of these threat networks will require a concerted and increased coordinated effort from all of us,” the analyst concluded.

On their final day together, the leaders heard a presentation on the role of the Inter-American Defense Board by Vice Adm. Nicolas Ríos of the Peruvian navy, chairman of the board’s Council of Delegates. The conference then focused on women in the military, with presentations by U.S. Navy Rear Adm. Martha Herb, director of the Inter-American Defense College, and Gen. Arturo Merino, chief of the Chilean Joint Staff. Herb also moderated a panel on the topic with leaders and experts from Chile, Uruguay, Peru and Paraguay.

“Women can be a force multiplier,” Herb said during her presentation. “If we are willing to eliminate preconceived limits that we artificially place on women, then those women who serve will quickly become a fact of life and mission enablers.”

The integration of women in defense and security institutions has been a topic of mutual interest across the Americas. In June, 19 Western Hemisphere delegations gathered in Port of Spain, Trinidad and Tobago for a conference on “Women in Military and Security,” where talks centered on policy considerations to promote gender equality and diversity in all aspects of defense and public security missions, ranging from recruiting and mentoring to professional development.

“If we’re going to field the most capable security teams, we must harness the full potential of the qualified and capable women who play an increasingly important role in our armed forces,” Tidd said, calling it a “military imperative” that, along with respect for human rights and the development of a professional noncommissioned officer corps, gives modern national defense forces the legitimacy, agility and competitive advantage “to effectively operate in today’s complex global environment.”

Integrating women into its operations is also an imperative for the U.N., as evidenced by a resolution its security council adopted almost 16 years ago urging nations to increase the participation of women and incorporate gender perspectives in all U.N. peace and security efforts.

According to the international organization, between 1957 and 1989, a total of only 20 uniformed women served as U.N. peacekeepers, but by 2014, more than 5,000 military and civilian female peacekeepers were supporting 16 U.N. peace operations worldwide.