Sousa Season Opener: After the Armistice 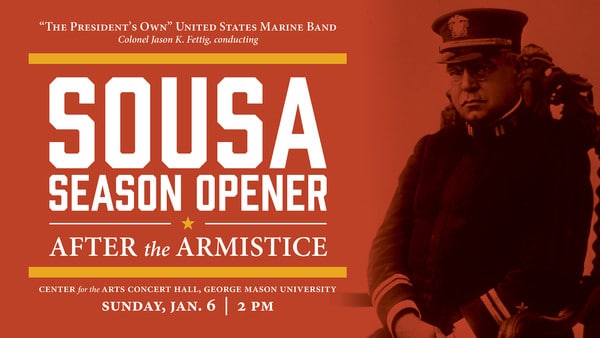 In a tradition that dates back 15 years, the Marine Band will open its 2019 Concert Season with a John Philip Sousa style concert focusing on the years after World War I and the Sousa Band’s first tours after the Armistice. The concert, conducted by Director Colonel Jason K. Fettig, will take place at 2 p.m., Sunday, Jan. 6 at George Mason University’s Center for the Arts Concert Hall in Fairfax, Va. The performance will also stream live on the Marine Band’s website and YouTube channel: youtube.com/usmarineband.

“John Philip Sousa was, of course, our most famous Director, serving from 1880-1892 in the United States Marine Corps,” Fettig said. “But he rejoined the service at the age of 62 during World War I, becoming a commissioned officer in the U.S. Navy and training bands. After the Armistice was signed, Sousa returned to his civilian life as one of the most famous bandleaders in America as well the ‘march king.’ He began touring again in 1919 with his famous Sousa Band, and this concert aims to capture the style, spirit, and music of those first concert tours after the armistice.”

The 1919 tour took the band coast to coast, and Sousa’s programs included his signature mix of orchestral and opera transcriptions, original works for band, virtuosic solos, encores, and the marches that made him a household name. However, after the Armistice, the concerts also included references to the losses of war and the need for the country to come together and heal.

The program will begin with Sousa’s Overture to The American Maid, the last of his comic operas and originally titled The Glass Blowers. The opera was more serious than his previous works and had a very nationalistic spirit and patriotic sentiment. Following Sousa’s Overture, Staff Sgt. Zachary Gauvain will perform the clarinet solo for Luigi Bassi’s Concert Fantasia on Motifs from Giuseppe Verdi’s Rigoletto.

“I am so excited to play this piece with such a talented group of musicians,” Gauvain said. “I kind of ‘grew up’ playing the Rigoletto fantasy and it became one of my favorite works in college. I hope to convey my love for the opera and its beautiful arias to the audience in this performance.”

The concert’s first half will end with a suite by Sousa titled “Impressions at the Movies.” This suite represents Sousa’s impressions of typical scenes from the silent movies of the day with fun movement titles like “The Crafty Villain and the Timid Maid” and “Balance All and Swing Partners.” The audience will definitely be transported back to the early 1900s and feel like they are watching one of the iconic silent films of the day.

The second half will begin with Modest Mussorgsky’s Persian Dance from his opera Khovanschchina, followed by Sousa’s own march, “The Golden Star,” composed as a dirge in memory of all those that lost their lives during the Great War. Sousa said of the piece, “It will not be a monetary success. One cannot write from his heart and write for rewards. I was thinking of those fine young boys who will never return.”

The rest of the program will feature Percy Grainger’s popular “Molly on the Shore,” Louis-Joseph F. Herold’s Overture to the opera Zampa, and Sousa’s The Goose Girl Song from one of his most successful operettas, The Free Lance. The concert will conclude in typical Sousa fashion with his most enduring and popular march, “The Stars and Stripes Forever.” Also, throughout the program, as was typical of Sousa during his tour concerts, the Marine Band will perform multiple encores of Sousa’s most well-known and beloved marches.

The Sousa Season Opener is free and no tickets are required. George Mason University’s Center for the Arts is located at 4373 Mason Pond Drive in Fairfax, Va. Free parking is available in Lot K. A Marine String Quartet will offer pre-concert music in the lobby beginning at 1:15 p.m.