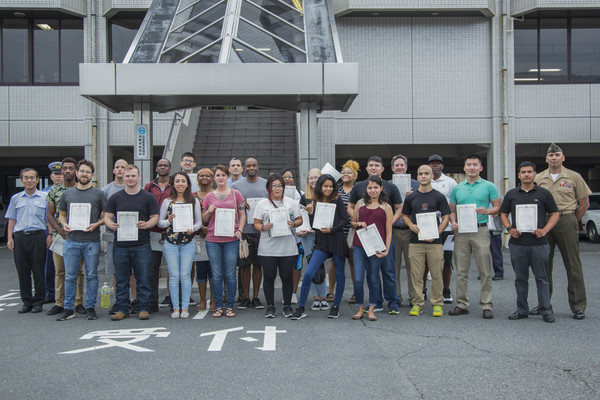 Promoted through the city of Iwakuni, the purpose of the program is to educate Status of Forces Agreement drivers on common driving errors in the city and how to correct them.

This class is conducted quarterly with 25 drivers scheduled to participate in each class.

The course began with an instructional period from Osamu Koizumi, the chief of police for Iwakuni City. During the class he gave drivers data that the Iwakuni police gathered from local traffic accidents and citations. The class also provided refreshers on road signs, turning at stop lights, speed limits and locations of local traffic accidents.

“A lot of the observations and citations issued are based off certain signage,” said U.S. Marine Corps Lt. Col. Ricardo Benivides, the Provost Marshall at MCAS Iwakuni. “They are trying to convey a message saying ‘this is what I’ve seen,’ and they’re trying to give you video and photos to associate them with corrective action in educating people on what they may or may not be doing wrong.”

The class transitioned to a hands-on portion, where the classmates drove with Iwakuni Driving School staff on a course that had all of the commonly mistaken signs and traffic light signals.

During the course, staff members took notes of what the drivers did and did not do right to hold onto and learn from later.

“They showed you through different obstacles as you drove through the course,” said Benavides. “They showed you the turning radiuses of the car and how to back into certain spots that are similar to the roads of Iwakuni.”

Of the 25 students who attended the course, they all received a certificate of completion for the class.

“The Japanese people are very safe,” said Sgt. Devon Inge, an aviation logistics information management support technician with Marine Aviation Logistics Squadron 12. “They care not only about the safety of us but the people on the road. They also care about making sure everybody knows how to drive in Japan.”

Inge said he would definitely recommend future classes to his fellow service members down the road.

TRICARE and You: Colorectal Cancer Awareness