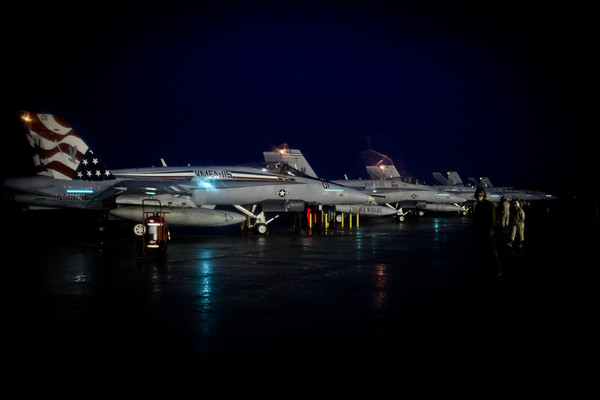 “We are headed overseas as part of a combat deployment. For some of us, this isn’t our first deployment to this region so we know what has to get done,” said a pilot with VMFA-115. “We can operate smoothly and efficiently to accomplish our mission while over there.”

Over the past months, the squadron has been working longer hours to prepare not only the aircraft, but also their minds for the fast-paced tempo of a deployment.
“Being deployed means perfectly executing our duties but in a foreign land,” said an air-framer with VMFA-115. “We won’t have the rest of Marine Aircraft Group 31to help us if we need it. Instead, we will be working with Marine Aviation Logistics Squadron 12 to accomplish our mission. Usually while deployed, our shifts change and operational tempo changes to better suit the mission we have to accomplish.”

The squadron was given the chance to spend time with their families the day of their departure. The United Services Organization provided food for the Marines, Sailors and their families.

“It’s nice to have the chance to spend some time with my family before I leave,” said the pilot. “Even though we are the ones leaving for the deployment, our families have to work hard to make sure everything is still okay at home. Deployments can be very taxing on our families and I am grateful for my wife to handle everything so gracefully. I am going to miss my wife and my kids very much.”

During the weeks leading up to VMFA-115’s departure, the Silver Eagles worked with the rest of Marine Aircraft Group 31 to prepare the aircraft for this deployment.
“Working with our neighboring squadrons is one of the major reasons we are ready for this deployment,” said the air-framer. “VMFA-251 has been able to send us some extra maintainers and parts when we really needed them since they returned to the air station. MAG-31 has been able to expedite processes for us and ensure we got what we needed and when we needed it. It has been a real team effort so we can leave and accomplish our mission.”