Run with a purpose 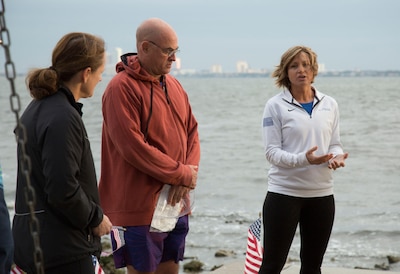 Her work brings her in contact with people that are sent into and out of USCENTCOM missions overseas. This fact is not lost on her.

In Abel’s personal time, she hosts a monthly run where participants wear blue and run to honor fallen service members.

The runs bring together members of the local community, military service members and their families.

“It helps to bridge the gap between the local community and the military by giving the community an appreciation for what our military does,” said Abel. “I think that it is important that we never forget those who have made the ultimate sacrifice.”

“I just like running, I don’t jump out of bed every morning excited to do it, but I am always so glad when I’m done,” said Abel. “Each day I run I feel like I’ve accomplished at least one thing.  I feel better physically and emotionally.”

At official “wear blue” events, American flags and large posters, with photographs of the fallen, line the course in a tribute called the “blue mile.”

“I was very moved when I experienced the blue mile in North Carolina during a half marathon at Fort Bragg.  I just love the mission of wear blue,” said Abel. “This (run) results in service members being remembered and honored year round, not just during special events or holidays, like Memorial Day,”

Abel has hosted the runs since November 2015, missing only one due to Hurricane Irma.

“Instead of just running, we are running with a purpose,” said Abel. “Every step is in honor and memory of those who have made the ultimate sacrifice.”

“Major Abel’s community service efforts exemplify the spirit of the American Soldier,” said Command Sgt. Maj. William Thetford, U.S. Central Command’s senior enlisted leader. “Her passion and dedication are an inspiration to others, and her work helps build a strong relationship between our military to the local community.”