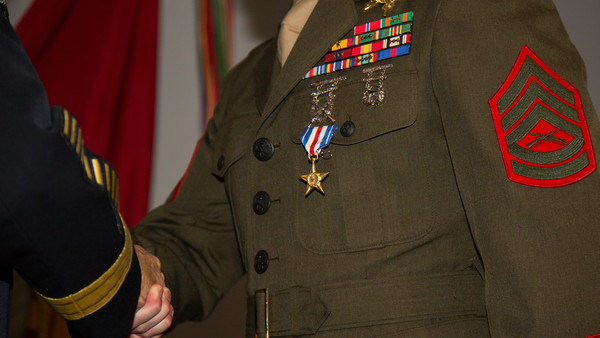 The Raider received the award for acts of valor, saving dozens of hostages following a terrorist attack in Mali in 2015.

The Silver Star is presented to service members who display conspicuous gallantry in action while serving the U.S. mission in operational environments and is the third highest award that can be given to a member of the U.S. armed forces.

The Raider was serving as a senior leader of a small special operations team when they received notification of a coordinated terrorist attack on a nearby multi-story hotel. The terrorists had over 170 hostages under their control. Up to a dozen American citizens were thought to be located inside. The Raider gathered his team, donned his equipment and set off for the hotel complex while devising a plan en route.

“There was very little time to respond,” said the CSO. “We fell back on what we had prepared for. There were points in which the situation became more intense, ambiguous and scary. At times, the situation we faced was confusing and difficult. However, our purpose was clear. That clarity and unity of purpose allowed us to navigate the ambiguity and manage our emotions to accomplish the mission at hand.”

The U.S. personnel braved small-arms fire, grenade explosions and acrid, choking smoke to save more than 150 lives. A burst of enemy gunfire caught one team member, dropping him with undetermined wounds. The team laid down a heavy base of fire as they pulled him back to safety.

“It was one of those defining points in life where you realize you are exactly where you belong,” said the CSO. “I knew beyond all doubt what needed to be done and I was completely dedicated to completing the mission. I never thought about failure, I only saw a problem that we could solve if we just worked through it. Every American we found and pulled out of the hotel only increased my desire to keep going. Every time the smoke cleared a little more, I felt both exposed and enabled. When we made contact with the enemy, all of those years of preparation instantly flooded back and I knew what to do.”

During the ceremony, General Tony Thomas, commander of U.S. Special Operations Command, presented the Marine with the award.

In addition to the Silver Star, the Marine received recognition from U.S. Assistant Secretary for the Bureau of Diplomatic Security Michael Evanoff.

“The Marine’s swift actions in Bamako prove that you can always count on the Marines,” said Evanoff. “For more than 70 years, the Diplomatic Security Service has worked side-by-side with the Marines, because no matter the danger or threat, we know the Marines are going to get in there and take care of business.”

Upon receiving his award, the Raider addressed the audience of Department of Defense personnel and families.

“My profession gives me the opportunity to serve my country in ambiguous environments where there are multiple right and wrong answers,” said the CSO. “We work and live in a world that has no clearly defined path to success and MARSOC has given me a venue to make an impact on our world. I thrive on the trust placed in me by our command to do the right thing when it is hard and be the man who can make it happen on the ground. That trust gives me an opportunity to be the very best I can be.”