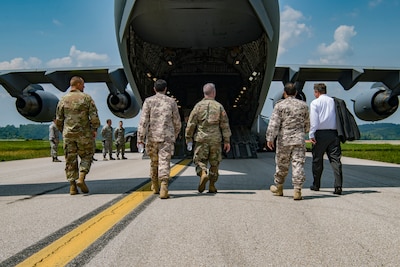 Key leaders from Qatar, the state of West Virginia and the West Virginia National Guard met here May 14 to discuss and celebrate their newly formed partnership.

This was the first meeting between the new State Partnership Program partners since the announcement of the West Virginia National Guard’s selection to be linked with Qatar in April. The Guard leadership capitalized on the opportunity to showcase the breadth and depth of experience to the Qatari delegation in multiple facets of domestic response, training, civil support, emergency response and contingency operations during the visit.

“The National Guard State Partnership Program has brought West Virginia and Qatar together — and is a point of pride for us and great interest, as West Virginia is home to strategic airlift operations and Special Forces,” said Al Kuwari during a press event.

“We are also looking forward to build off of the West Virginia National Guard and Qatar Armed Forces partnership,” he said.

“Qatar is exceptionally important to the United States as an ally and as a partner in dealing with violent extremism, in supporting NATO, in Afghanistan and other places,” Hoyer said.

The general added, “I think it’s a testament to the men and women of the West Virginia National Guard, to our governor, to our [elected officials] who all came together to say we want to be a broader part of the nation’s defense and take on an even greater role with the establishment of this partnership with Qatar.”

Qatar has recently announced increased funding for infrastructure improvements and long-term basing to support American and coalition forces fighting in the region.

“It is our hope that the Qatar armed forces and American military personnel not only work and fight terror together on the base,” Al Kuwari said, “but will live side by side as they stabilize the Middle East. This effort is a reflection of Qatar’s hospitality and warm friendship with Americans.”

Through the partnership with Qatar, the West Virginia National Guard will seek to increase military and diplomatic cooperation, develop and expand defense capabilities and mutually beneficial training interactions. In addition, the two entities will work to increase interoperability of forces and deter and disrupt criminal and terrorist activities in the region.

“The premise of the State Partnership Program is to promote peace and stability throughout the world,” said program director Army Capt. Joshua Goforth. “Our new partnership will play a significant role in ensuring that premise is carried out through our enduring relationship with Qatar and their military forces.”

In the following months, leaders plan on signing a memorandum of understanding as well as establishing concrete plans for training and support missions between the military forces.

This is the second partner nation for the West Virginia National Guard and the sixth partnership in the U.S. Central Command area of responsibility.