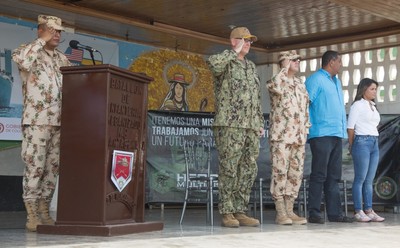 “Our mission here is to promote peace, security and stability throughout the Americas by strengthening our partnerships with the nations of South and Central America,” said Capt. William Shafley, commander, Task Force 49.  “The medical team will work alongside the government of Colombia to provide top quality medical care to people in need.”

A team comprised of more than 900 medical personnel, including military, non-governmental organization volunteers and members from partner nations, began screening surgical patients Saturday, Nov. 24.  The opening ceremony marked the commencement of the medical sites’ full operability, which will continue to treat patients for the next several days.

“Comfort’s presence here represents an enduring promise of friendship, partnership and solidarity with Colombia,” said Shafley. “This mission is but one demonstration of our commitment to a powerful cooperation between our two countries.”

Brigadier General Jaime Hernando Rivera Jaimes, acting commander of the Colombian Army 1st Division and Wilson Rojas Vanegas, governor of La Guajira, were among some of the distinguished guests and speakers at the ceremony.

“It’s a pleasure for us to have this ship here to bring healthcare to the Colombians and Venezuelans in this difficult situation,” said Vanegas, translated from Spanish. “To the United States, we can’t thank you enough.  We are immensely happy with this grand mission of surgeries and medical attention.”