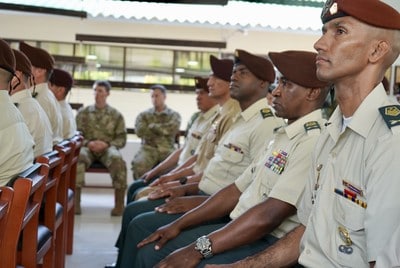 TOLEMAIDA, Colombia – The noncommissioned officer has often been described as the “backbone” of the United States Armed Forces for being the most visible force charged with executing an organization’s mission and training its personnel. Developing the NCO has long been a strategy in the U.S. military for maintaining readiness by providing the education and training needed to operate in complex environments.

For other countries, however, the NCO’s professional development often has not been a top priority. Colombia’s Joint Special Operations Command (CCOE) took a significant step in bringing NCOPD to the forefront with an opening ceremony held Mar. 4, 2019, in Tolemaida, Colombia, for a course that hopes to bridge the gap between officer and NCO.

“I want to thank the United States which kindly dedicated itself to help establish this course through their former sergeants major who were part of special operations and are instructing the course,” said Brig. Gen. Fernando L. Losada Montoya, Chief of Education for the Colombian Air Force. “For us it very important that our NCOs are able to receive this type of training. They have experience in combat, and they bring a lot of expertise with them. They will not only offer great input to this course but bring with them that experience to be able to help our Armed Forces.”
The opening ceremony had several guest speakers including the senior enlisted leader for U.S. Southern Command who followed Losada and described initiatives within the unit’s Area of Responsibility.

“U.S. Southern Command Commander’s number one line of effort is about building the team, our team,” said Sgt. Maj. Bryan K. Zickefoose, senior enlisted leader for USSOUTHCOM. “In U.S. Southern Command and (Special Operations Command South) we are committed to helping the NCOs in the CCOE, and it starts with these courses. This is not a tactical course, this is a strategic course. Communication at a different level.”

Zickefoose continued describing the role of the NCO and what the course would provide to the senior NCOs selected for the first iteration of the Advance Joint Special Operations Forces Course.

Master Gunnery Sgt. Otto E. Hecht, senior enlisted leader for the Marine Raider Training Center, followed Zickefoose and similarly described the responsibilities of the senior NCO and what the course means to CCOE’s future NCOs.
“The senior staff NCO is someone who is disciplined, that has been trained, and has upheld the standard for a very long time,” said Hecht. “The senior staff NCO is the backbone of any military organization. The senior staff NCO is the one who carries out the commander’s intent and figures out how to make it work when things are challenging and when there is doubt…Ultimately, you are leaders and this course will give you the training and education to help you become a better leader.”

The 19 selected senior NCOs for the Advance JSOF Course listened to all the words of wisdom from the guest speakers and were made to understand the importance of NCOPD. Not wasting any time, the course immediately began at the conclusion of the ceremony.

Both the Basic and Advance courses can seat a minimum of 18 students and a maximum of 25 students. The Basic course will last two weeks while the Advance course will have a duration of three weeks.
For those who helped plan the course and those in attendance, the significance of the milestone was not lost.

“It’s the first of its kind,” said Master Sgt. Justin R. Daniels, SOCSOUTH strategy NCO in charge and planner for the Advance/Basic Joint SOF NCO Course. “This course will provide the educational curriculum designed to help reach objectives in the AOR.”

The overall goal of the course is to train the trainer so that the students will one day become the teachers, explained Daniels.