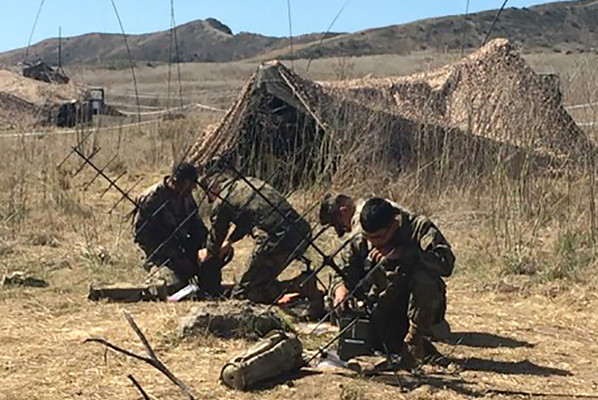 The Mobile User Objective System, or MUOS, is a narrowband satellite communication system that uses commercial cell phone technology to increase access to voice and data communication while on the battlefield. The Marine Corps will be the first service to widely deploy the system as it has already fielded thousands of MUOS-capable AN/PRC-117G radios over the previous six years. Ultimately, the firmware within the radios will be updated to support the MUOS waveform and three new antenna kits will be added to support multiple operational configurations.

“MUOS provides several advantages over legacy SATCOM,” said Capt. Shawn Avery, MUOS project officer in Command Element Systems at MCSC. “The most obvious to the operating forces will be the increased accessibility. This will allow us to explore new operating concepts by pushing on-the-move voice and data connectivity to the squad level.”

MUOS is designed to support users who require mobility, higher data rates and improved operational availability. The updated technology in the system offers a more secure and reliable beyond line-of-sight communication capability. The MUOS waveform will be added to the AN/PRC-117G and future multi-channel radios within the Marine Corps inventory.

“Previously, infantry companies had limited access to SATCOM, but now company commanders can employ their Marines beyond line of sight with a higher degree of confidence in maintaining those critical [command and control] links,” said Avery.

The three antenna kits that will be fielded within MUOS include: a traditional directional antenna for better data performance at-the-halt; a dismounted on-the-move antenna which enables voice and data access when mobile; and a vehicular kit that modifies the AN/VRC-114’s to accept MUOS.

MUOS is comprised of a space-based segment, a ground-based segment connected over fiber optic cables between multiple continents, and a software-defined radio terminal capable of running the MUOS waveform.

The new satellites are more robust and have more individual carriers, which allows the signal to be focused on a smaller geographic footprint, Avery said. This improvement enables on-the-move access while improving overall reliability in vegetation, urban environments and other extreme conditions where legacy SATCOM was challenged.

Additional improvements include the ability to roam, similar to a cell phone. Marines can begin in the continental United States, and then deploy and have immediate access to another satellite on the ground providing unmatched operational flexibility.

“The system takes some stress off of the operators, allowing them to walk around on patrol without the range constraints of terrestrial networks,” said Avery. “And in the past, users didn’t have access to the Defense Information System Network over SATCOM. We either had to hold terrain to extend terrestrial links to provide DISN access, which incurs significant operational risk, or lease commercial capabilities which have proven costly. With MUOS, we’re meeting the data exchange requirements of today’s force with equipment that is organic to the Marine Air-Ground Task Force.”