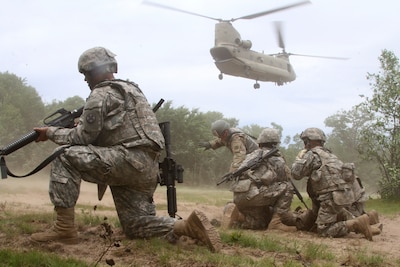 Members of the Ohio Army National Guard practiced their ability to evacuate combat casualties during an exercise here, June 19.

Army Spc. Matthew Sell, an interior electrician with the 1194th Engineer Company, role-played a casualty with a gunshot wound through the chest and a dwindling pulse. Army Spc. Diantre Pressley, a plumber with the 1194th, provided first aid to Sell, while other soldiers provided security and suppressive fire, and radioed a medical evacuation report.

“At first I was nervous,” Pressley said. “Then it just kicked in, and I started to go through the steps of what I learned and what I needed to do.”

With time working against them, Pressley and the team peeled off Sell’s vest to get a better look at the simulated wound. The team continued to communicate their situation to Army Spc. Adam Reeder for the evacuation report, while Pressley began to execute necessary lifesaving measures.

‘There was an Exit Wound’

“I slapped a chest seal on him, and there was an exit wound. So, I put one on his back too,” Pressley said. “It’s my job to make sure he’s good until he gets [additional] medical care.”

The soldiers then hoisted Sell above their shoulders into the bed of their tactical vehicle.

“We just changed our technique,” Pressley said. “There are certain carries you can do without the vest, so we had to switch to that to get there fast enough and efficiently.”

As the truck tires stirred up dust down the rugged trail to the landing zone, Pressley continued to reevaluate Sell’s condition and administer care.

As the truck halted, the tailgate dropped, and the team poured out with Sell in tow to await the arrival of a CH-47 Chinook helicopter.

“I just made sure everybody was in the right places,” Reeder said. “First establishing our security lines, and then there were some situations where things had changed so we had to quickly reevaluate, reassess and get everybody on the right page.”

After several anxious minutes, the helicopter’s beating blades could be heard. Army Spc. Ryan Reneker painted the sky from the middle of the field with his fluorescent yellow safety belt, hoping to be seen by the helicopter’s pilots as they emerged over the tree line.

With a roaring pass, the helicopter looped around and began its decent. The force of the rotor wash, like a tornado, blasted the air with debris, and blowing sand stung exposed skin.

“I really wasn’t sure what to expect,” Reeder said. “I think some of the new guys didn’t expect the sand to come in as quickly and as hard as it did.”

“My squad relies on me to take care of them if anything would happen,” Pressley said. “My training allowed me to properly evaluate him, take care of him and take him to safety.”

For nearly 15 minutes they soared several hundred feet over the training facilities here. As the Chinook landed, the adrenaline-fueled soldiers flooded from the rear, and — for one last time — they held a secure position until it departed.

“When I landed my blood was rushing,” Pressley said. “It was good to go fast and really apply our training to something fast-paced like that.”

Pleased with their run, the team eagerly mounted their vehicle and returned to celebrate their success and share the news with the other two teams back at the start of the training lane.

“After running through it, I was highly pleased,” Reeder said. “The guys did an outstanding job, and I think everybody really enjoyed the whole real-life scenario aspect of it.”

“I really appreciated the willingness and motivation of the younger soldiers,” said Army Capt. Bryan Andrews, commander of the 1194th.

The Sky's the Limit for Kids at STARBASE Summer Camp