Need it fast? Marines can print it 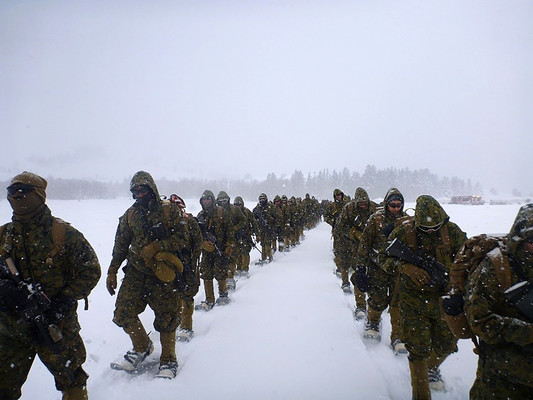 In the last few years, the Marine Corps has increased its exploration of additive manufacturing, or 3D printing, to quickly replace parts for weapons, vehicles and equipment.

Most recently, Marines at the Mountain Warfare Training Center and the AM Team at Marine Corps Systems Command came up with a solution to print out same-day snowshoe clips.

The MWTC, located in northern California, is tasked with the mission of training Marines in mountain and cold weather operations. During the winter season, snow accumulation can reach six to eight feet with temperatures as cold as 20 degrees below zero.

“If a Marine is attacking a position in the snow while in combat, and the clip on their boot breaks, it makes it difficult for the Marine to run forward with a rifle uphill to complete the mission,” said Capt. Matthew Friedell, AM project officer in MCSC’s Systems Engineering and Acquisition Logistics. “If he or she has a 3D printed clip in their pocket, they can quickly replace it and continue charging ahead.”

MWTC and MCSC worked together to print a newly designed snowshoe clip made out of strong and flexible resin at a cost of only five cents per clip. The team created and printed the clip within three business days of the request.

“The capability that a 3D printer brings to us on scene saves the Marine Corps time and money by providing same-day replacements if needed,” said Capt. Jonathan Swafford, AM officer at MWTC. “It makes us faster than our peer adversaries because we can design whatever we need right when we need it, instead of ordering a replacement part and waiting for it to ship.”

Another innovative product the team created for MWTC is an insulated radio cover. The radios the Corps uses have lithium ion batteries that die quickly in the cold, so the AM Team designed a 3D printed cover to keep the batteries warmer and help the charge last longer in cold temperatures.

“Just like the Commandant says, it’s important we continue innovating at all levels to remain ahead of our adversaries,” said Swafford. “Even our youngest Marines should be focused on innovation. The more of us who know how to use and design with this process, the better off we will be.”

AM Marines collaborate and share files using the Marine Maker website. They communicate and share ideas so other Marines can easily build upon them, Swafford said.

In addition to creating replacement parts, additive manufacturing is used to design models and prototypes. Before the Modified Full Width Mine Plow prototype was developed, the AM Team created a 3D model with foldable tines to demonstrate how the Assault Breacher Vehicle could more easily deploy from a Navy Landing Craft Utility boat onto the shore.

“More than ever before, we are able to use 3D printing as a catalyst to spark everyone’s imagination for quick-fix solutions,” said Friedell. “The Marine Corps is leading the way in additive manufacturing, and we have to continue to use AM in every level of our warfare to fix equipment and weapons faster than the enemy and stay in the fight.”