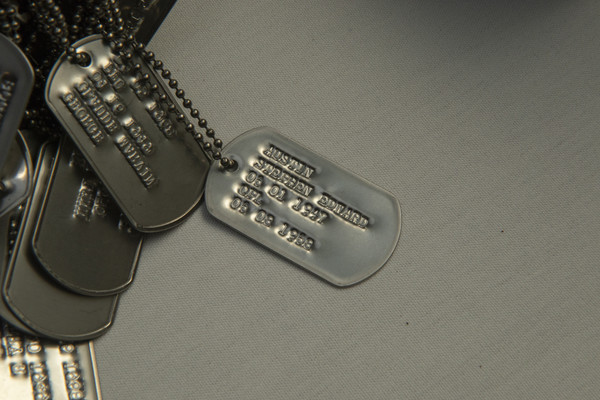 Cpl. Stephen E. Austin, 1st Battalion, 27th Marine Regiment was posthumously awarded with the Navy Cross July 21 for his bravery during the Vietnam War in 1968.

Commandant of the Marine Corps General Robert B. Neller presented the award to Austin’s daughter Neily Esposito and brother Allen Austin during the 50th anniversary reunion for 1st Battalion 27th Marine Regiment. The Navy Cross is the second highest valor award after the Medal of Honor.

Neily, who was born shortly after Austin deployed, never had the chance to meet her father physically, but developed a bond with him through stories told by his family and fellow Marines.

“If I had a choice, I would’ve loved to have met him, but I think this experience has helped me grow closer to him. Just meeting people that knew him or knew of him is so overwhelming,” said Esposito. “I wish I had a dad but being around all these people fills that void.”

Austin was killed June 8, 1968 in Quang Nam Province, during Operation Allen Brook. He was pinned down with his squad by an enemy machine-gun bunker. Austin, realizing that regrouping to another position to wait for an airstrike would result in more casualties, exposed himself to enemy fire to get close enough to throw a grenade into the bunker.

Wounded repeatedly by enemy fire, Austin continued to advance on the bunker. With the last bit of life remaining in him, Austin was able to throw a grenade up into the bunker slit to silence the enemy and assure a safe withdrawal of his platoon. The combination of rifle fire and the explosion of his own grenade resulted in Austin’s death.

When his body was recovered, a letter written the day before his death was found in his pocket. The letter highlighted the struggles Marines faced during the Vietnam War.

“On my birthday things didn’t go too good,” read the letter to his family. “One of my best friends who I met in Hawaii was shot twice in the stomach and he died the following afternoon. His name was Art Sinksen. I am going to write his parents a letter as soon as I go in to Battalion area. I am so sick of fighting I’ve seen and helped to many boys my age or younger that was wounded or dead. I thank the Lord each morning I get up.”

Austin never made it to battalion area and was never able to write the letter to Sinksen’s family. Like Sinksen and many Marines before him, Austin made the ultimate sacrifice for his brothers at arms.

“I think he exemplified many of the other Marines. Vietnam, there was a lot of bravery and courage that the media never really covered over here in the United States. It was really all negative publicity,” Allen said. “They never heard about the bravery and courage these men under fire showed and gave their lives for and that’s what he did, he gave his life for his fellow Marines.”

Since 1992, Allen has operated a website, stephenaustin.org honoring his brother and his fellow 1/27 Marines. The website played a major role in Austin being nominated for the Silver Star, which was upgraded to a Navy Cross after the Office of the Secretary of the Navy learned of Austin’s bravery.

Though 50 years have passed since Austin’s brave act, Allen is excited to know that his brother’s bravery will never be forgotten.

“It’s overwhelming. I’m so proud of him,” Allen said. “he’s finally recognized for what he did that day.”