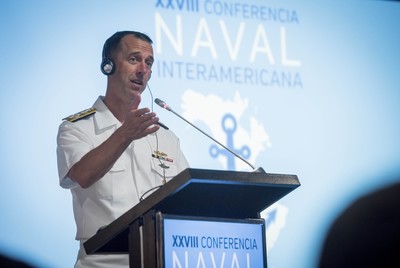 The bedrock of America’s military advantage is the system of alliances the United States maintains around the world.

Navy Adm. John M. Richardson, the chief of naval operations, reached out to allies in South and Central America at the 28th Inter-American Naval Conference last week in Cartagena, Colombia.

In line with the National Defense Strategy, Richardson is looking to strengthen partnerships with like-minded nations.

“We are all Americans here; however, we are bound by more than simply our shared geography,” Richardson said during an address to conference attendees. “We share inter-American values and a commitment to regional and global institutions that are designed to confront common security challenges.”

He added, “That we are here together is no coincidence. While military-to-military-relationships are important, I believe Navy-to-Navy partnerships are the ‘first among equals.’ These Navy relationships are so natural because we share backgrounds, cultures, knowledge, and a love and respect for the sea and what it can provide.”

That the conference was held in Cartagena was itself significant. The city was once the seat of a notorious drug cartel. Colombia was the scene of the longest-running civil war in the Western Hemisphere. But democratic institutions won out and last year, peace talks between the government and the Revolutionary Armed Forces of Colombia bore fruit and FARC laid down its arms. Colombia is now an exporter of security, and a valued ally.

“Despite the challenges we face — internal to our nations or common to all — our regional security relationship forms the keel of our shared American ship,” the admiral said. “For me, this conference reaffirms that keel is as steady and as strong as it has ever been.”

The United States, he said, is committed to building new relationships and strengthening old ones.

“The best thing to do is to be the best possible partner to our friends and allies, and that’s why the majority of our efforts here in this region are focused on strengthening the partnerships that are backbone of the regional security network,” Richardson said.

The nations work together in many different areas. Chile, Colombia and Peru are all participating in the Rim of the Pacific exercise near Hawaii. Colombia is participating for the 12th time. It is a sign of the confidence the United States holds in its South American allies that Chilean Commodore Pablo Niemann serves as the Combined Force Maritime Component Commander; in effect, commanding all maneuvering afloat forces in a series of high-end warfare missions.

“This RIMPAC is a landmark — partners achieving their maximum potential naval power, improving together,” Richardson said.

Later this year, Colombia will host Exercise Unitas. Planning for the exercise — held yearly since 1959 — has begun with Argentina, Brazil, Canada, Colombia, Costa Rica, Ecuador, United States, Honduras, Mexico, Panama, Peru, the United Kingdom and the Dominican Republic meeting to discuss scenarios. The purpose of the exercise is to improve coordination among naval forces.

“Our mutual participation in these exercises reflect the security interests and the prosperity interests of our respective countries,” Richardson said. “This is part of a broader, enduring effort to steam together with your navies so that through training, we can learn to communicate, navigate and operate together.”

But the deployments also serve a higher purpose, the admiral said.

“They enhance security. They maintain order. They preserve a system that is legal, transparent, and fair for all nations,” he said. “And they promote prosperity for all.”

Richardson will continue on and meet with officials in Brazil, Argentina and Chile.