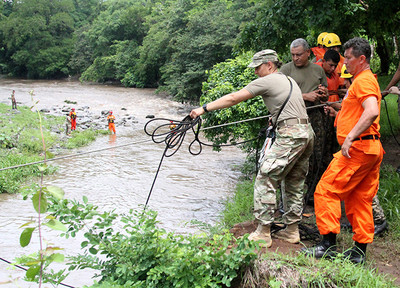 The training featured an exchange of best practices and ways to enhance reaction times and interoperability between the Salvadoran military and firefighters, said NHARNG Maj. Brian Fernandes.

“We’re here to exchange ideas that can hopefully save lives,” he said.

His group of five Soldiers included some with mountaineering expertise. 1st Lt. Katrina Simpson, an infantry officer with Mountain Company and a graduate of the Army Mountain Warfare School, instructed the Salvadorans on basic knots used to lash ropes together and anchor them securely to span hazard areas during rescues. They included the bowline, square, butterfly, double figure eight and clove hitch.

“This is all brand new to them,” said Simpson, who helped pace the learning. “Yesterday was the crawl. Now we’re running.”

As the learning progressed, it fostered an atypical partnership for the Salvadorans. “It’s rare for the military and firefighters to train together,” Fernandes said. “It was an added bonus. The interoperability between fire, military and between the two countries is equally important.”

The language barrier was breached thanks to the efforts of several interpreters, including Sgt. 1st Class Carolina Compton, a NHARNG recruiting NCO and fluent Spanish speaker.

“It’s something I’ve been wanting to do for a long time,” Compton said. “It was amazing.”

The exercise culminated with simulated rescues performed in the Lempa, darkened by the region’s rainy season.

Soldiers and firefighters took turns rescuing and being rescued. Rescuers hurled ropes from the high, steep riverbanks to swimmers as the current began to sweep them downstream. Laughter and celebratory cheers met each successful throw.

“To be able to enjoy the work you’re doing, it’s a plus,” said 2nd Lt. Johnny Sibrian of the Salvadoran army. “I had fun.”

The exchange is one of many coordinated through the NHNG-El Salvador State Partnership Program, which links a state’s National Guard with the armed forces of a partner country in a cooperative, mutually beneficial relationship.

At the end of the training, Col. Domingo Monterrosa, commandant of the host Salvadoran Armed Forces Operations Center, addressed the participants during a small ceremony and presented each NH soldier with a certificate of appreciation.

“Thank you for sharing your expertise with us,” Monterrosa said. “You’re not strangers. You should feel at home when you’re here. We are sister armies and friends.”