MWD: not your average devil dog 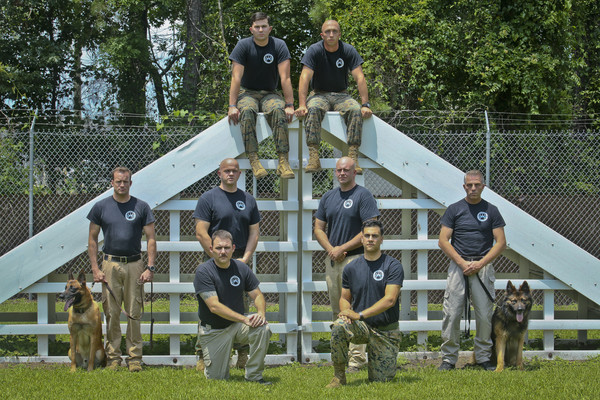 As man’s best friend, dogs have held different names and jobs throughout human history, from herding livestock to hunting animals. They have been a constant companion to the humans they serve.

“I was a regular military policeman before I became a military working dog handler,” said Sgt. Brendon Parkhill, a dog handler with the Provost Marshal’s Office. “This job has opened my eyes and taught me a lot about one of the smallest programs in the Marine Corps. Growing up, I only had two dogs and now part of my duties is being responsible for an entire kennel of MWDs.”

According to the handlers, historians have documented humans using dogs as tools of war all the way to 600 B.C. Marines can trace their origins of working with K-9s to 1942 when using breeds such as Doberman Pinchers and Rottweilers as guard and attack dogs. As tactics of war changed throughout the decades, so did the roles and breeds of MWDs. Instead of Rottweilers, the Marine Corps began incorporating German Sheppard’s, Belgian Malenois, and Labrador Retrievers into
the MWD program. These breeds detect narcotics and explosives as well as supporting Marines on patrols and sentries.

“We are assigned to only one dog at a time but we take care of all of them collectively,” said Officer Matthew Buckley, a dog handler with the Provost Marshal’s Office. “To be an effective team, the handler and MWD must sync. The handler feeds trains and exercises their dog every day to keep up the bond and rapport that has been built over time. Before a team can go on the road, they must be certified. The handler has to prove that his MWD will listen to basic obedience commands and that they can work together to accomplish a mission. Because of how strong this bond can become, when a MWD is ready to retire, its handler is given the first opportunity to adopt it.”

In order to become a handler, Marines must attend a 12-week course at Lackland Air Force Base in San Antonio where service members from every branch learn skills on dog handling procedures. Marines learn tactics such as detecting and patrol work with their K-9’s as well as how to properly groom and take care of their dogs.

“Before we were able to go to Lackland Air Force Base, each Marine had to do on the job training,” Parkhill said. “This exposes the Marine to life as a MWD handler. You help with the bite training and cleaning the kennel and get used to being around dogs all day every day. In order to be an effective handler, a Marine needs to have thick skin and not have a big ego. Handlers have to act funny for their dogs to get their attention or reward them. The OJT shows the MWD leadership that a Marine is ready to go to the school and become a trained handler. The school house taught me a lot and how to be a basic dog handler, but the OJT set me up for success and showed me what my future could be after certifying as a MWD handler.”

From helping officers detect contraband and aiding in vehicle searches, the military working dogs of MCAS Beaufort engage in operations to keep the Tri-command and lowcountry safe.

“These dogs are an integral part of the security system in place that keeps our bases and surrounding communities’ safe,” said Lt. Col. William Butters, the Provost Marshal for MCAS Beaufort and Marine Corps Recruit Depot Parris Island. “Our MWD teams help keep the Marines and Sailors of the Tri-command safe as well as support missions outside our gates. These teams help support local and federal law enforcement. They can go to a temporary assignment of duty as far south as Florida and as far north as New York to help accomplish a mission. I have been in the Marine Corps for 17 years and have not seen a greater asset than a base’s MWD program.”

Army participates in a helo lift of ITB students