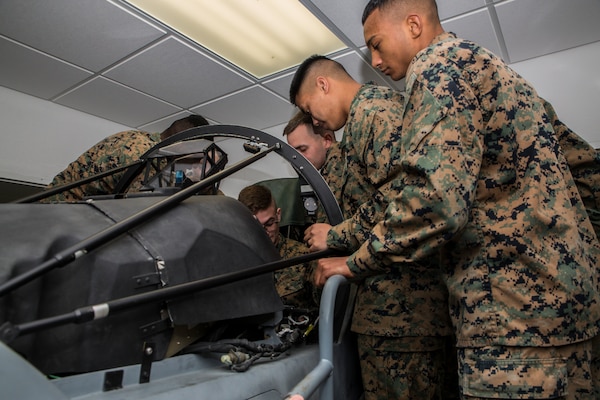 Deep in the heart of Marine Corps Air Station Cherry Point, North Carolina, lies a group of young men and women, undistracted by the fast tempo of the operating forces, eager to learn and hone their skills as aviation mechanics.

Through thorough instruction, the “Warrior Owl” students of the Center for Naval Aviation Technical Training Unit Cherry Point, shepherded by knowledgeable instructors, learn the delicate art of repairing and maintaining the U.S. Marine Corps’ and Navy’s fleet of combat-hardened aircraft and ordnance.

According to Lt. Col. Tegan K. Owen, CNATT Unit Cherry Point commanding officer, the mission of CNATT is to provide initial training for a multitude of military occupational specialties, including AV-8B Harrier and KC-130J Super Hercules aircraft. It also offers advanced aviation training for Marines who are already out in the operating forces.

Whether it’s in organizational-level courses, intermediate-level classes or sending instructors around to various units to teach, MCAS Cherry Point CNATT molds an average of 2,000 minds a year, training and sharpening the skills of the Marines and Sailors in their respective military occupational specialty.

While one might think the schoolhouse is focused solely on teaching the students how to do the job, instructors also mentor them to be better service members and citizens. The Marines and Sailors who are waiting to start class can usually be found honing their basic warrior skills in the Marine Corps Martial Arts Program or volunteering in the local community.

“We try to get them in the mindset to be involved in the community wherever they get stationed,” said Sgt. Maj. Reginald Daniels, MCAS Cherry Point CNATT sergeant major.

MCAS Cherry Point CNATT is also the only CNATT schoolhouse that trains aviation intelligence Marines. Beginning September 2019, it will also be the only schoolhouse training Marines to fix and maintain the RQ-21 Blackjack unmanned aerial vehicle.

Not only does MCAS Cherry Point CNATT oversee the schoolhouse training here at the air station, it is also responsible for a Marine detachment in Little Rock, Arkansas.

So rest easy America, the Warrior Owls of CNATT are training to keep the nation’s aircraft in the sky and its enemies at bay.

CNATT Unit Cherry Point is one of 27 sites located throughout the continental United States and Japan, which develops, delivers and supports aviation technical training. CNATT is a training center under Naval Education and Training Command, and is a technical training agent for the Naval Aviation Enterprise, an organization designed to advance and sustain naval aviation warfighting capabilities at an affordable cost.