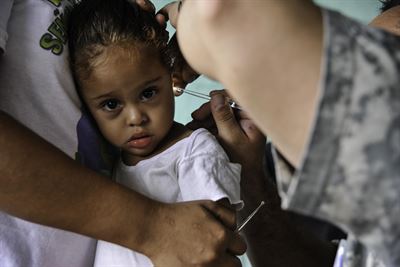 COLÓN, Honduras, Aug. 8, 2016 — Soldiers under the command of Joint Task Force Bravo (JTF-B), Medical Element (MEDEL), executed a medical readiness training exercise for the first time in the village of La Boveda, Trujillo July 28-29, 2016, serving a total of 1,072 patients of all ages during the two-day event that involved key leaders from both JTF-Bravo and Honduras.

JTF-Bravo MEDEL personnel perform MEDRETEs throughout Central America on a monthly basis, with each event requiring weeks, and even months of planning.

“The initial planning of this mission began 90 days prior to the operation,” said U.S. Army Capt. Summer Sampson, Medical Administrations Officer and the officer in charge of this MEDRETE, who hails from San Diego, California. “I was also very involved with the liaison medical officer (LNO) and civil affairs officer, both of whom played a big role in coordinating with the host nation to ensure mission accomplishment.”

The LNO assigned to this mission was Dr. Wilmer Amador, who has been involved with the JTF-Bravo MEDEL since 1992.

“I have been coordinating MEDRETEs since I started working here, and I can tell you that we have made a difference,” said Amador. “We have had comments made by people in several villages as to how positive it has been for them. We have also noticed behavioral changes in some of the people as far as their health. In general they have become more conscious about the preventive aspect of taking care of their health.”

As the LNO, Amador coordinates mostly with non-profit organizations such as the Ministry of Health. He also coordinates with the Honduran military, school teachers and school principals.

“It is absolutely imperative that we interact with them in order to conduct these MEDRETEs,” said Amador.

U.S. Army Maj. Rosemary Reed, JTF-Bravo civil affairs officer, from Tacoma, Washington, who was also involved in the MEDRETE coordination and execution stressed the importance of involving the partner nation in the planning process and how that contributes to long-term benefits.

“I think that is key when it comes to medical engagements and civil affairs,” said Reed. “We include the host nation, in the planning and in the execution of these missions. We include local leaders such as the mayor of the local town, key government officials and non-profit organizations that provide service to the community. We talk about the analysis of the population, behaviors and changes. Preventive medicine has a huge job. Something as simple as handing out pamphlets to the local population about basic healthcare education is actually very effective in the long run.”

One of JTF-Bravo’s goals during the MEDRETE is to ensure MEDEL personnel are prepared to respond in support of contingency operations and to develop an understanding of current environmental risks and medical capabilities of the local communities. But that is only part of the reason these missions take place.

U.S. Army Lt. Col. Robert Walkup M.D., JTF-Bravo MEDEL healthcare provider from Lubbock, Texas, commented, “MEDRETEs are good for training for the service members, but they’re also an opportunity to help improve the health of individuals in host nations. Socially, especially in countries like Honduras, these events are so important, these are the types of events that people talk about for months or even years afterwards.”

“Coming from a civil affairs unit back home in the states, I deal with a lot of infrastructures, and healthcare happens to be part of that,” stated Walkup. “We build infrastructures of at-risk nations that have been through war, famine, natural disasters and economic collapse where the infrastructure is weakened and even failing to maintain basic things like utilities and environmental security. A pure civil affairs mission, on the medical aspect side, would be to work with host nation counterparts to assess how they are doing with respect to their health and infrastructure, and a lot of that involves preventive medicine.”

There have been more than 300 MEDRETEs conducted and JTF-Bravo MEDEL personnel have treated more than 326,000 medical patients and 69,670 dental patients since Oct. 1993. An average operation allows more than 1,000 people living in remote, austere environments to receive medical, dental and preventive medical care.