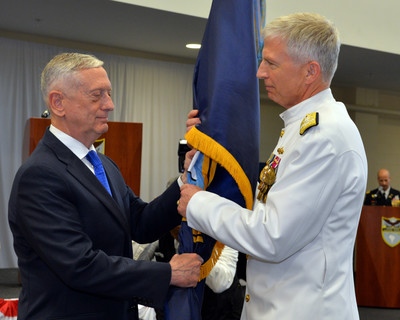 WASHINGTON–U.S. Southern Command is dedicated to bringing the hemisphere together, and the progress made in building secure, stable, growing democracies is encouraging in a turbulent world, Defense Secretary James N. Mattis said today in Miami.

“There is more in this hemisphere that binds us together than drives us apart,” the secretary said at the ceremony attended by many chiefs of defense and senior officials from Central and South America and the Caribbean.

The secretary noted he recently traveled to the region. “At every stop we made, our partnership demonstrated what I would call a natural fit marked by the innate friendliness between our peoples,” he said. “The friendliness and attentive respect are bolstered by our regions shared values and cultural ties – resilient friendships that buttress us against the usual ups and downs inherent in international relations and they provide us common ground on which we meet.”

There are naysayers who believe the past two years have been bad for democracy, Mattis said, but they must change their tune when looking at the Western Hemisphere. “From Ottawa to Buenos Aires to Santiago we increasingly find an island of hemispheric opportunity and democratic stability amidst a churning and ever-changing global sea,” he said. “Our fortunate, forward-looking hemisphere has made strides not only democratically, but also economically and militarily.”

This sets up well for the future. “As the political dimension matures and political headwinds are encountered, our hemispheres militaries can be stabilizing forces, especially when we collaborate to protect our peoples from Mother Nature’s storms and man-made insults to civilization – whether they be terrorism, drug trafficking or other security threats,” he said.

Work with neighbors is based on mutual respect, Mattis said. The United States works to build teamwork and stable military relationships with all the nations in the region “except for those suffering under the unfortunate and irresponsible leadership in Cuba, Nicaragua and Venezuela with their anti-democratic, autocratic domination of their citizens who deserve better,” he said.

He pointed to the mission of the Navy hospital ship USNS Comfort, to aid Venezuelan refugees fleeing their crisis-racked nation, as an example of Southcom’s mission. “Alongside 10 partner nations and six nongovernmental organizations, we are sending doctors, not bombers, to help limit human suffering,” Mattis said. “We are all better for this partnership. In supporting this effort and other initiatives, Admiral Tidd has proven himself a trusted partner to our neighbors.”

The secretary lauded Tidd’s 40 years of service capped by his Southcom efforts to foster relationships and to build foundations for those relationships to enhance mutual understanding throughout the region.

“He recognized that people-to-people ties are the true bridge to effective military cooperation, buttressing our nation’s regional diplomacy through his tireless efforts as he acted in concert with many of you who honor us with your presence here today,” Mattis said of Tidd.

He also praised Tidd’s embrace of new ideas. “His flexibility, willingness to experiment and constant quest to learn and improve served the command well, as he strove to make it more integrated, more responsive and more focused on building trust between our militaries – for trust is the coin of the realm among military leaders in our hemisphere,” the secretary said.

Thanks to Tidd’s work, Southern Command is better positioned to counter transnational threat networks, prepare and respond to natural disasters, and promote military professionalism and military-to-military exchanges across the region, Mattis said.

The secretary welcomed Faller to command, praising his 35 years of service. Mattis tasked Faller to build on his own experience with foreign partners “from the Middle East to the Indo-Pacific to the Atlantic – as you assume your duties as helmsman of U.S. military efforts to our south.”

Mattis charged Faller “with taking this command to the next level, building on the trusted relationships Admiral Tidd cultivated, and strengthening our ties with our respected partners who we live alongside. I have every confidence you will do just that, carrying out your duties with the honor, grit, teamwork and skill you have demonstrated every day throughout your career.”

Military Child of the Year Award