Marines save airman’s life in Okinawa 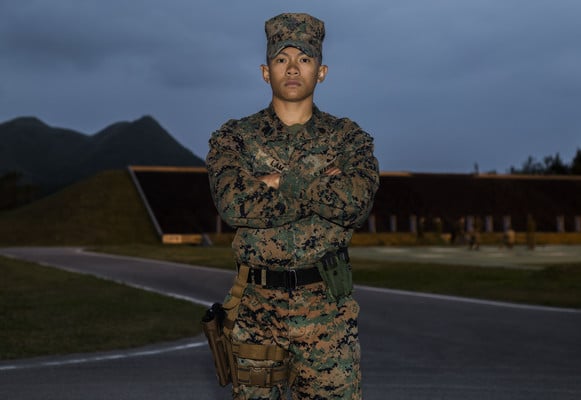 The airman, whose name is being withheld out of respect for the family’s privacy, was involved in a motor cycle accident along Japan National Route 331. A group of Marines witnessed the accident and rushed to the scene as first responders.

Marine Sgt. David Lam, an assistant warehouse chief with 3rd Transportation Support Battalion, 3rd Marine Logistics Group and San Jose, Calif., native was one of the first Marines on the scene, ordered the group of Marines to call emergency services and directed traffic along the busy road to allow ambulances to arrive.

“I never would have imagined myself being that close to an accident. It was an oh-snap moment,” Lam said. “I couldn’t fathom how quickly everything was moving.”

“Their quick actions and willingness to get involved are commendable and exactly the type of actions you would expect from all military members that may find themselves in this sort of situation,” said Air Force Maj. James Harris, the Squadron Commander with 353rd Special Operations Maintenance Squadron.

Diaz, from Orlando, Fla., rushed to the injured to begin cutting off layers of clothing, which helped identify the airman’s wounds. He then ran to the neighboring areas to find large pieces of wood for splints to support any broken bones.

“I saw bones sticking out of the airman’s body and knew I would need some kind of splint to support the injuries until emergency services arrived,” Diaz said. “We took action and worked together [relaying on] past training and knowing we needed to help.”

Duranwernet, a Charleston, S.C. native, stabilized the injured airman’s neck and spine while providing comfort through the shock.

Emergency services loaded the airman on to a helicopter with assistance from Tan, a native of Orange County, Calif. Elliot, from Katy, TX, used the airman’s cell phone to call their command and accompanied the airmen to U.S. Naval Hospital Okinawa.

“I rode in the helicopter to give the airman a friendly face, to be there with them, to let them know everything was going to be okay,” Elliot explained.

The airman was given emergency medical treatment to stabilize their condition then transported to another location for follow-on treatment and recovery. According to 353rd Special Operations Squadron leadership, the airman is expected to make a full recovery.

Harris said the Marines were the only reason the airman was still alive. He explained that “if the Marines didn’t respond when they did or how they did the airman could have lost his arm or worse.”