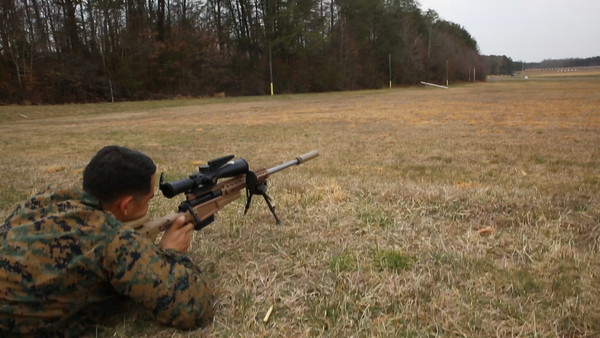 MARINE CORPS BASE QUANTICO, Virginia —The Marine Corps is adopting a new precision sniper rifle to increase the lethality and combat effectiveness of scout snipers on the battlefield.

The Mk13 Mod 7 Sniper Rifle is a bolt-action rifle that offers an increased range of fire and accuracy when compared to current and legacy systems. It includes a long-action receiver, stainless steel barrel, and an extended rail interface system for a mounted scope and night vision optic.

The Mk13 is scheduled for fielding in late 2018 and throughout 2019. Units receiving the Mk13 include infantry and reconnaissance battalions and scout sniper schoolhouses. This weapon is already the primary sniper rifle used by Marine Corps Forces Special Operations Command, or MARSOC.

Fielding the Mk13 ensures the Corps has commonality in its equipment set and Marine scout snipers have the same level of capability as North Atlantic Treaty Organization forces, said Master Sgt. Shawn Hughes from III MEF.

“When the Mk13 Mod 7 is fielded, it will be the primary sniper rifle in the Marine Corps,” said Lt. Col. Paul Gillikin, Infantry Weapons team lead at Marine Corps Systems Command. “The M40A6 will remain in the schoolhouses and operating forces as an alternate sniper rifle primarily used for training. The M110 and M107 will also remain as additional weapons within the scout sniper equipment set.”

The Marine Corps identified a materiel capability gap in the maximum effective ranges of its current sniper rifles. After a comparative assessment was conducted, it was clear that the Mk13 dramatically improved scout sniper capabilities in terms of range and terminal effects.

The 3rd Battalion, 5th Marines Scout Sniper Platoon used the weapon for over a year (including during a deployment) in support of the 2025 Sea Dragon Exercise. Feedback from MCSC’s assessment, MARSOC’s operational use, and 3/5’s testing of the weapon system led to its procurement of the Mk13 for the Corps.

The Mk13 increases scout snipers’ range by roughly 300 meters and will use the .300 Winchester Magnum caliber round, a heavier grain projectile with faster muzzle velocity—characteristics that align Marine sniper capability with the U.S. Army and Special Operations Command.

“The .300 Winchester Magnum round will perform better than the current 7.62 NATO ammo in flight, increasing the Marine Sniper’s first round probability of hit,” said Chief Warrant Officer 3 Tony Palzkill, Battalion Gunner for Infantry Training Battalion. “This upgrade is an incredible win and will allow snipers to engage targets at greater distances.”

The Mk13 will also be fielded with an enhanced day optic that provides greater magnification range and an improved reticle.

“The new day optic allows for positive identification of enemies at greater distances, and it has a grid-style reticle that allows for rapid reengagement without having to dial adjustments or ‘hold’ without a reference point,” he said. “With this type of weapon in the fleet, we will increase our lethality and be able to conceal our location because we are creating a buffer between us and the enemy.”

MCSC completed New Equipment Training for the Mk13 with a cross section of Marines from active-duty, Reserve and training units in early April.

“The snipers seemed to really appreciate the new capabilities that come with this rifle and optic,” said project officer Capt. Frank Coppola. “After the first day on the range, they were sold.”

In a time where technology, ammunition and small arms weapon systems are advancing at an increasingly rapid rate, it is extremely important to ensure the Marine Corps is at the forefront of procuring and fielding new and improved weapon systems to the operating forces, said Gillikin.

“Doing this enables the Corps to maintain the advantage over its enemies on the battlefield, as well as to secure its trusted position as the rapid crisis response force for the United States,” he said.

Airmen contribute to saving a life during New Horizons 2018