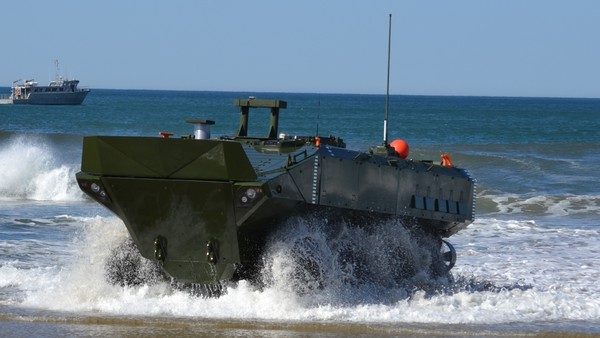 Following a successful Milestone C decision by the Assistant Secretary of the Navy for Research, Development, and Acquisition, the contract options worth $198 million will allow BAE Systems to build 30 low rate production vehicles, which will start delivering in the fall of next year. These vehicles will begin the transition of a portion of the Assault Amphibious Vehicle fleet.

The Assault Amphibious Vehicle has been in service for more than 40 years, and many of its components and parts are obsolete and no longer manufactured. Because of this, the vehicles are becoming increasingly costly and difficult to maintain. That, and the changing environment in which Marines find themselves plagued by the improvised explosive device threat, has produced a need for a new, more survivable combat vehicle that can maneuver from ship to shore and beyond.

“In order to be a step ahead of our adversaries in the future, the Marine Corps needed to find a modern vehicle at an affordable price range that provided significant capability enhancement and performance over the AAV,” said Col. Kirk Mullins, ACV 1.1 product manager in Program Manager Advanced Amphibious Assault in the Program Executive Officer Land Systems.

The ACV is an eight-wheeled vehicle that will provide protection akin to the Mine-Resistant Ambush Protected Vehicle, with landward maneuverability and mobility that is superior to that of the AAV. It will be outfitted with a precision weapons station for enhanced lethality, and a robust swim capability, allowing it to operate within the littorals and beyond.

“The ACV provides a mobile capability that mechanizes the force to maintain tempo with the remainder of the [Marine Air-Ground Task Force]; specifically the M1A1 tank,” said Mullins. “It isn’t maintenance intensive because of its increased reliability, and it also provides greater protection against threats we encounter on the battlefield.”

The vehicle underwent substantial testing over the past two years to determine how it will protect Marines, be easier to maintain, and meet requirements for survivability and reliability. Testing took place at the U.S. Army Aberdeen Test Center in Maryland; the Amphibious Vehicle Test Branch aboard Camp Pendleton, California; the Yuma Test Center in Arizona; the U.S. Army Engineer Research and Development Center in Mississippi; and the White Sands Missile Range Army Base in New Mexico.

Additionally, the ACV was evaluated aboard the USS Somerset and the USS Anchorage to demonstrate its ability to launch from and recover to amphibious ships, and overall shipboard compatibility.

“Our test program was exhaustive in an effort to ensure we gathered all the data needed to make the best decision,” said Mullins. “We tested the ACV for survivability, mobility, water operations and reliability, and completed gunnery testing.”

Marines who participated in the operational assessment evaluated the vehicle favorably, Mullins said. Those who had previous experience with the AAV were enthusiastic and optimistic about operating the ACV in the future.

I Marine Expeditionary Force will be the first to receive the new ACV when fielding starts in the fourth quarter of 2020. Full operational capability is scheduled for 2023.