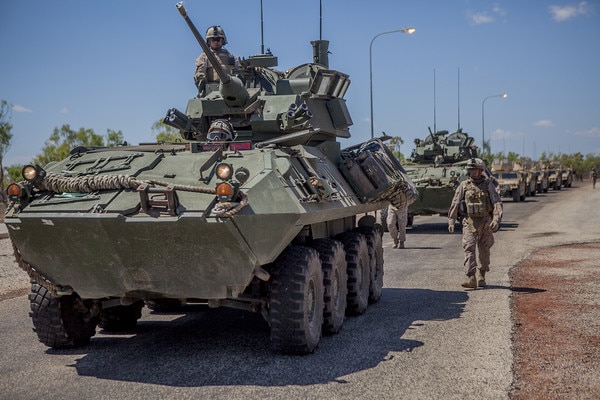 The Marine Corps plans to begin replacing its legacy Light Armored Vehicle with modern Armored Reconnaissance Vehicle late in the next decade.

The ARV will be highly mobile, networked, transportable, protected and lethal. The capability will provide, sensors, communication systems and lethality options to overmatch threats that have historically been addressed with more heavily armored systems.

Since the 1980s, the LAV has supported Marine Air-Ground Task Force missions on the battlefield. While the LAV remains operationally effective, the life cycle of this system is set to expire in the mid-2030s. The Corps aims to replace the vehicle before then.

Marine Corps Systems Command has been tasked with replacing the vehicle with a next-generation, more capable ground combat vehicle system. In June 2016, the Corps established an LAV Way-Ahead, which included the option to initiate an LAV Replacement Program to field a next-generation capability in the 2030s.

Preliminary planning, successful resourcing in the program objectives memorandum and the creation of an Office of Naval Research science and technology program have set the conditions to begin replacing the legacy LAV with the ARV in the late-2020s.

The office is amid a science and technology phase that allows them to conduct advanced technology research and development, modeling and simulation, whole system trade studies and a full-scale technology demonstrator fabrication and evaluation.

These efforts will inform the requirements development process, jump-start industry and reduce risk in the acquisition program.

The office is also supporting the Ground Combat Element Division of the Capabilities Development Directorate by performing a trade study through the U.S. Army Ground Vehicle Systems Center in Michigan. This work will help to ensure ARV requirements are feasible and to highlight the capability trade space.

ONR has partnered with industry to build two technology demonstrator vehicles for evaluation. The first is a base platform that will comprise current, state-of-the-art technologies and standard weapons systems designed around a notional price point. The second is an “at-the-edge” vehicle that demonstrates advanced capabilities.

“The purpose of those vehicles is to understand the technology and the trades,” said Myers.

In support of acquisition activities, PM LAV anticipates the release of an acquisition program Request for Information in May 2019 and an Industry Day later in the year to support a competitive prototyping effort. The Corps expects a Material Development Decision before fiscal year 2020.

“We will take what we’ve learned in competitive prototyping,” said Myers. “Prior to a Milestone B decision, we’ll be working to inform trade space, inform requirements and reduce risk.”

The Corps believes the ARV will support the capability demands of the next generation of armored reconnaissance.

“This vehicle will equip the Light Armored Reconnaissance Battalion within the Marine Divisions to perform combined arms, all-weather, sustained reconnaissance and security missions in support of the ground combat element,” said Myers. “It’s expected to be a transformational capability for the Marine Corps.”