Making it Rain: Improving Medical Readiness at the Frontline 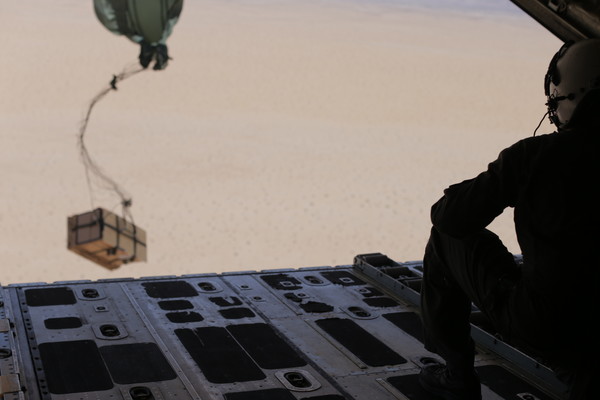 When people are in need of medical care, time is always a factor.  Many times service members find themselves operating in austere environments such as disaster relief areas and forward operating bases where the transportation of medical supplies can be a complex undertaking. Depending on the environment, transporting supplies on the ground may not be an option. The Marines and Sailors of 1st MLG are employing their capabilities in conjunction with Marine Aerial Refueling Transport Squadron 152 (VMGR-152) to drop units of blood by air to those operating in such inflexible areas.

“Currently, if you want to deliver blood you have to put in a request at the Joint Blood Program who will fly it to a location outside the intended area and it will then have to be transported via ground to the surgical unit that needs it,” said Navy Lt. Joshua Knapp, the deputy health service support officer for the 1st MLG’s Heath Service Support Element. “What we are hoping to do is to develop the procedures so that we can actually fly the blood to the surgical unit and drop it by air to the intended area.”

The units of blood were dropped from 500 feet by the KC-130J Super Hercules, but the personnel involved did not know if the reinforced packaging would protect the units. At 500 feet the altitude did not have an affect on the blood, however, the units had to maintain a temperature of 32 to 50 degrees Fahrenheit. With current packaging materials, units of blood are able to maintain temperatures for 48 hours.

There are many different moving parts that need to fall into place in order for this concept to become a reality. First was getting the blood from Naval Medical Center San Diego to Marine Corps Air Station Yuma. This was completed in an expedient manner to ensure the integrity and viability of blood units were not compromised, and were subject to testing shortly after being air dropped. At MCAS Yuma, Marines with 1st, 2nd and 3rd MLG packed and prepped the blood to be dropped out of a KC-130J Super Hercules with VMGR-152. Marines from the MLG’s were involved to ensure training was shared across the units.
There were five different packaging variations used for the air delivery. Each utilized materials from the Authorized Medical and Dental Allowance List and a special insulated box called a ‘Collins’ box to include various parachute configurations.

Once the blood landed in the intended area, Navy Corpsmen with 1st MLG Health Service Support Element inspected the cases and blood bags to make sure they were still a viable product. At the time of the training, the corpsman found no evidence of damage to the blood bags and the performance of each packaging variation was recorded in order to document and share the details of how to successfully accomplish this air delivery technique.

However, the blood was still required to be transported back to Naval Medical Center San Diego to test if hemolysis occurred, which is the rupturing or destruction of red blood cells. This can occur on impact and must be tested.

Naval Medical Center San Diego did find hemolysis occurred in the units of blood being used in the exercise. However, it is thought to have been due to the age of the blood, which was 20 days past expiration. Expired blood is used in the training to ensure viable blood is available for those in need. At this time, further testing is being conducted by the medical center to determine if the hemolysis occurred due to the blood samples being expired.

The air-drop delivery was a successful training event for all units involved who are now tasked to refine the training and make it a viable option for the Marine Corps’ logistical requirements.

“The biggest thing that came from training is education to the Marine Corps as a whole,” said GySgt. Jacob Reichert, the air delivery operations planner for the 1st MLG. “I want Marines to hear about this and say, ‘Wow, they air dropped blood; I wonder what else we can drop?’ We want to get this training to start a huge progression in the realm of air delivery.”