Acting Secretary of Homeland Security Elaine Duke announced the DHS Leadership Year on October 1, a yearlong effort (FY18) to promote a culture of leadership excellence and highlight the importance of leadership at all levels. As part of the initiative, the Office of Leadership (CG-128 – formally CG-12C) will highlight leadership opportunities available, give the fleet tools and resources to support leaders/supervisors in effectively managing performance, and continue the leadership dialogue.

As a junior enlisted member, you may feel expendable or just like another cog in the well-oiled machine of the Coast Guard.  This perception can be attributed to many factors such as billet structure, recurrent transfer seasons, personnel replacements, and strict standardization. It is a leadership concern that these demands do not engender feelings of expendability among the crew – the potential downside of being a, otherwise, “well-oiled machine.” 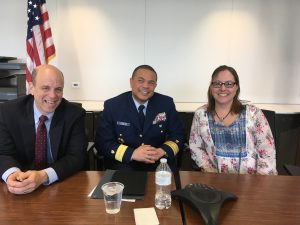 (From left to right) Gary Rasicot (CG-1D), Rear Adm. Michael Johnston (CG-93), and Janet Williams (DHS – moderator) pose for a photo at a “How Inspiring Leaders Build a Culture of Engagement” event.

After recently attending the Department of Homeland Security Executive Speaker Series with Rear Adm. Michael J. Johnston and Gary C. Rasicot, my eyes were opened up to the leadership philosophies of those in some of our highest levels of the organization and my perception began to shift.

On April 18, DHS Headquarters Learning and Development Institute hosted a live-streamed event through Adobe Connect on the topic of “How Inspiring Leaders Build a Culture of Engagement.” The event was a Q&A with Johnston and Rasicot as part of the DHS Human Resources Academy Executive Speaker’s Series, in support of the DHS Leadership Year’s initiative and Q3 theme: Engagement Culture Starts with Leadership.

When people understand the greater mission and how they fit into that picture, they can bring their personal energy and inspiration to the table. They own what they do. Rasicot shared “there was a reporter visiting Cape Canaveral around the time of the Apollo space program. As he roamed the grounds he ran into a janitor and asked him what he does there – and the man responded, ‘I help put people on the moon.’” This kind of engagement does not happen by accident but instead it is built through people within the organization connecting to the bigger picture.

In recounting his experiences with cultivating engagement, Johnston recalled an instance in New Orleans shortly before Hurricane Katrina, where he the commanding officer of the Coast Guard Electronics Systems Support Unit.

In an effort to address lagging performance from the local telephone service providers that was not keeping pace with the needs of the Coast Guard’s search and rescue operations, Johnston invited the workers to come and experience live search and rescue operations. In hearing the often desperate voices of people in need over Rescue 21 (the Coast Guard’s advanced command, control and direction-finding communications system), the repair workers came to understand the integral nature of their role in the mission. From then on, not only did service all around improve, but when Hurricane Katrina hit the city a few weeks later and devastated infrastructure, this same contingent of people were among the very first to get in touch with Johnston to develop a response plan. 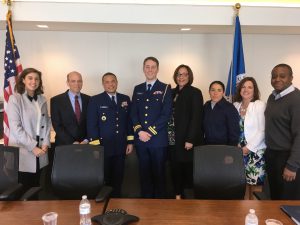 Johnston stressed the value of establishing relationships with people – understanding their needs and motivations – establishing a common bond based on the principles of your purpose. And once you take care to build these relationships, inspiration becomes a boomerang.

“Leadership is a lot of work – you can’t expect to wait at your desk and have people come to you,” added Rasicot. “It’s basic human interaction.” When asked how else one can measure the success of an organization’s leadership through engagement, Rasicot went on to suggest that retention numbers are a good indicator. “You’ll find that most people leave an organization because of their supervisor,” and not out of some larger irreconcilability with the mission.

Both executive leaders and the moderator, prompted by questions from the crowd, discussed this further and agreed that no one wants to see talent hemorrhaging from the organization because of “personality issues” with first and second-line supervisors. Both Rasicot and Johnston concluded that in order to build those skills that cultivate trust, and tap into and facilitate people’s potential, funding is necessary to establish a concrete leadership pedagogy.

“As people move up the hierarchy and become supervisors, we, the Coast Guard, should invest in the training of their leadership expertise as much as we do in their technical expertise,” said Johnston, asserting that it is our responsibility that the two grow in direct proportion to each other.

Rasicot added, “we need to invest in leadership and not just talk about leadership.”

Soldier Communication Gets a Boost