Laying the groundwork for a multinational amphibious task force 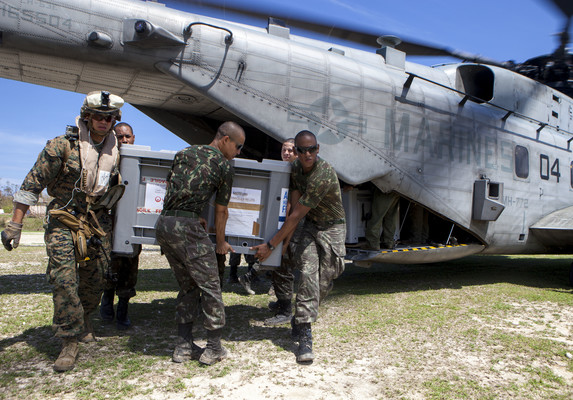 Personnel, aircraft, and equipment from key partner nations working shoulder to shoulder while serving together in a multinational amphibious task force within maritime areas of Latin America and the Caribbean – this is what the future looks like in the minds of Marines and Sailors from U.S. Marine Corps Forces, South and several other regional military forces.

“Given the complex threats spanning the Western Hemisphere, it is impossible to establish true security and rule of law without a comprehensive, multinational maritime strategy,” said Maj. Gen. David G. Bellon, the commander of MARFORSOUTH. “To be effective, this strategy must incorporate all of our countries working together to deter transregional crime and mitigate the human suffering caused by natural disasters.”

In a time of competing requirements around the world, the staff of MARFORSOUTH recognizes that no single military service or nation has the resources required to successfully address all of the threats and disasters that can affect the Western Hemisphere.  It will take the efforts of multiple regional countries to counter the destructive impact of natural disasters like hurricanes and earthquakes, as well as manmade crises ranging from illegal commercial fishing to illicit trafficking in narcotics and dangerous materiel, according to Bellon.

“The United States and several other nations, including Brazil, Colombia and Chile, are already committing training teams to partners in Central America in order to grow regional security capabilities and foster the rule of law,” said Bellon.  “However, this effort is at best coordination and de-confliction; it isn’t synchronization or integration.  Collectively, we must increase our collaborative efforts and information sharing to gain efficiencies and better address the requests and needs of our partners.”

Marines took the first steps in taking the vision of a multinational task force from concept to reality this year when a Colombian Naval Infantry officer, Lt. Col. Erick H. Del Rio, became a senior member of Special Purpose Marine Air-Ground Task Force – Southern Command.  This multifunctional organization builds security force capabilities in Latin America and the Caribbean through recurrent training events.  It is also trained and equipped to provide timely response to natural disasters and other crisis situations.

“Lt. Col. Del Rio is positively impacting how we think about regional security,” said Tony Abati, the MARFORSOUTH plans director. “His intellect and thought-provoking suggestions will energize our ongoing evolution to integrated, multinational action against pressing security problems.  Over the next few years, we desire to see Brazil, Peru, Chile, Argentina, and Mexico follow suit, adding their talented personnel and versatile operational capabilities to the growing core of a true, multinational amphibious task force.”

Getting a partner nation officer on the staff of SPMAGTF-SC is only the beginning.  Later this year, U.S. Marines and regional naval infantry leaders will gather in Brazil to conduct UNITAS Amphibious 2018 – a tabletop exercise that focuses on planning humanitarian assistance and disaster relief activities. Tabletop exercises don’t involve actual movements of troops, ships, or aircraft.  Instead, they focus on scenario-based discussions and contingency planning.

“Brazil will lead the way during the 2018 tabletop exercise, enabling multiple nations to work together on likely disaster scenarios,” said Bellon.  “They are also looking at converting UNITAS Amphibious 2019 from a scripted exercise to a real-world capability event.  Such an exercise would involve loading and deploying ships with humanitarian relief capabilities, command and control assets, and a multinational force that can provide timely assistance in the event of another hurricane strike in the Caribbean, for example.  This would be a major shift away from traditional exercise planning and execution – a positive shift that Brazil’s leadership is causing to occur.”

“As we look to the future, we see partners like Brazil, Colombia and Chile leading the way to an eventual multinational amphibious task force that can provide security training, humanitarian assistance, and disaster response to our friends and partners in the region,” said Bellon.  “This task force and associated collaboration are key pieces to our shared security future.”

Laying the groundwork for a multinational amphibious task force