Key Spouses Support the Mission Behind the Scenes 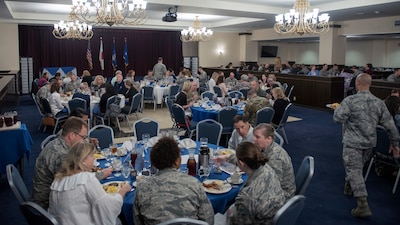 A luncheon was held here March 2 by the leaders of the 18th Wing to show their appreciation for the Key Spouse program and what it does for the base and its personnel.

The event allowed base leaders to put faces to names with their Key Spouses and give thanks in person for what they contribute to the mission.

The Air Force Key Spouse program is an official Air Force family readiness program put in place at the unit level to help airmen and their families be resilient through all of the challenges of being a member of the armed forces. While other programs for resiliency may be more visible, some may say that the Key Spouse program is one type of glue that holds the base together behind the scenes.

“The luncheon let our appreciation shine for the Key Spouses,” said Val Lombardo, 18th Force Support Squadron work and life consultant. “They are a dedicated group of selfless volunteers who give up their time to support airmen and their families.”

The time volunteered to the program isn’t just for a social gathering — the Key Spouses have to earn their title through Air Force mandated training.

Potential Key Spouses go through an interview process with the unit commander, and upon acceptance into the program are tasked to complete six hours of initial training, as well as additional training each quarter, Lombardo explained. The program is outlined officially in AFI 36-3009.

Even though the program follows a regulation, the Key Spouses don’t have to choose the Air Force over supporting families.

“Key Spouses are an intermediary between [leaders] and the families,” said Destiny Erwin, 18th Wing Staff Agencies head key spouse. “We’re there to support in making sure everyone is resilient and can complete their mission, whether that is the airmen or the families who support them.”

When thinking of vital resources to completing the mission, the Key Spouses may not be the first thought that comes to mind, but according to Air Force Brig. Gen. Case Cunningham, 18th Wing commander, they are a crucial component to the success of Team Kadena.

“While some Key Spouses serve in groups and various support agencies, the support provided to the families in those organizations not only directly benefits those families, it also pays forward to benefit squadrons and organizations across Team Kadena,” Cunningham said. “I can’t say thank you enough to the amazing Key Spouses and Key Spouse mentors of Team Kadena.”