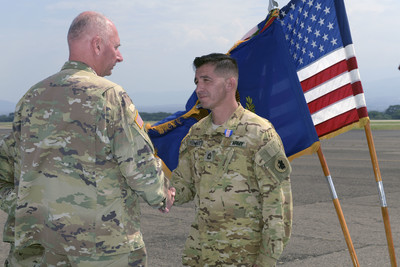 Fernandez, a Fresno, Calif. native, was conducting his normal duties on the morning of August 16, 2017 when he witnessed a Honduran Air Force L410 training flight crash unexpectedly through high-voltage powerlines and a telephone pole, striking the 1-228 Headquarters building.

During the initial seconds of the aircraft crash, chaos ensued. Without hesitation, Fernandez maneuvered into the danger area, directing personnel in vicinity of the crash to remain away from the raw electricity and combustible fuel multiplying the already life-threatening conditions.

“It was just a normal day. I actually drove down to S6 because I wanted to talk to their personnel and saw them out in the parking lot. As we were talking, an airplane crashed, maybe less than 100 yards from us into the battalion building,” said Fernandez as he recalled what happened that day.  “I was in my EZ-Go at the time and immediately ran to grab my aid bag and ran towards the plane crash. The plane had hit the battalion building, it was kind of chaotic.”

After negotiating the electrical wires, debris and other hazardous conditions, he reached the severely wounded Honduran aviators, checked for signs of life and began directing others in vicinity of the crash site.

“I met up with a few of my medics over there.  Our first goal was to try to extract the pilots; we noticed 3 guys in there.  There was fuel spurting out all over us as we were trying to extract them,” said Fernandez.

Fernandez retrieved the flight engineer from the aircraft and got him to a safe distance where another flight paramedic was able to provide the necessary medical care. He then turned his attention back to the other aviators who were severely entangled in the wreckage. Unable to extract the pilot within conventional means, Fernandez climbed into the cockpit.

“They were all pretty trapped in so we were trying to take the aircraft apart around them. We were able to extract two of the pilots right away, the third one unfortunately was not able to get extracted and passed away in the aircraft. It was not until hours later that the fire department was finally able to get him out,” said Fernandez.

“It’s bitter sweet because I wasn’t the only guy there. There were plenty of guys there who were taking just as much risk as I was,” said Fernandez. “I definitely don’t consider myself a hero. This wouldn’t have been possible if it wasn’t for the rest of the Charlie Company and the rest of the 228 guys who were out there, also putting their lives in jeopardy to try to save a life.”

As a result of Fernandez’s selfless service and decisive action, two Honduran Airmen are alive today, earning him the Soldier’s Medal for Heroism, one of the highest decorations of the United States Army.