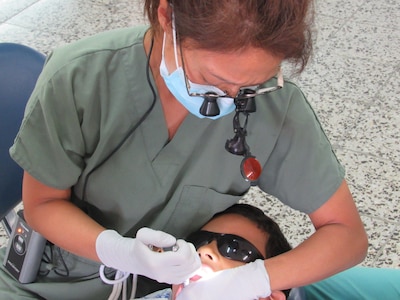 A total of 208 pediatric patients between the ages of 2 and 16 were seen during the two-week mission.

The dental humanitarian assistance project, which was introduced by SOUTHCOM and administered by DENCOM, was a combined effort between JTF-Bravo and local Honduran entities.

“We had a control population of patients that we had selected to be seen,” said Dr. Wilmer Amador, JTF-Bravo dentist and MEDEL medical officer from Comayagua, Honduras. Amador went on to explain how children were selected from some of the city’s poorest areas to receive treatment.

The Honduran armed forces coordinated with U.S. Army troops to provide security as well as transportation for the children. The Catholic University of Tegucigalpa supported the mission by providing the dental facility and equipment for the children to receive care.

“I thought the mission was very successful. We saw a lot of kids in the two weeks that we were there,” said U.S. Army Maj. (Dr.) Margaret Novicio, JTF-Bravo dentist, from San Diego, California. “Challenging, but very rewarding at the end of the mission.”

Novicio has been serving in the Army Reserves for four years and was recently mobilized to deploy to Soto Cano Air Base in support of the JTF-Bravo MEDEL.

There were a total of 13 U.S. Army personnel present with MEDEL, some of whom are assigned to Tripler Army Medical Center, Hawaii; Fort Sam Houston, Texas; and Fort Sill, Oklahoma.

Procedures that were provided throughout the two weeks included fillings, limited extractions, stainless steel crowns on primary molars and X-rays.

“We provided restorative and operative dentistry for these children,” said Amador. “It provided a fantastic assistance to our people because it provided dental care to those children who are really poor and whose parents couldn’t otherwise afford such care.”

The project not only provided much-needed care to Honduran youth, it was also an opportunity for the MEDEL staff to hone their professional skills.

“Behaviorally it was very challenging. Just like in the states, the whole dental process for kids is very scary to them,” said Novicio. “You can never predict how a child is going to act. A lot of general dentists back home usually refer children to a specific pediatric dentist. Because I don’t get to work with kids often, that made this a great opportunity for me personally. We had a pediatric dentist there, who I got to learn tips from as far as approaching and taking care of a pediatric patient.”