Inside the Infantry Immersion Trainer 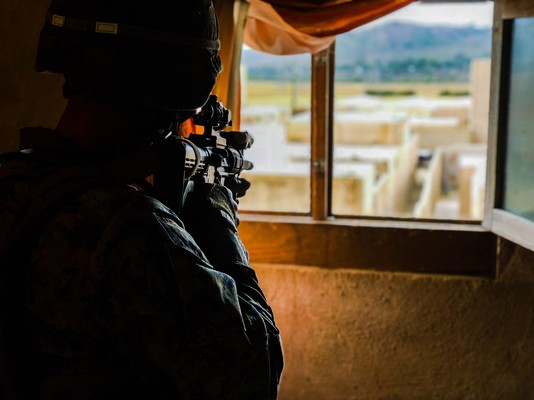 The 15th Marine Expeditionary Unit is currently executing Rim of the Pacific, or RIMPAC, exercise with 2nd Battalion, 1st Marine Regiment, also known as 2/1, taking the lead for training.

Throughout the week of July 9 to 11, U.S. Marines and partner forces from Canada and Mexico rely on the skills and experience developed in the three weeks of working together, as they tackle the IIT.

To complete this highly realistic, scenario-driven training, the Marines and soldiers need to be at peak performance as the IIT provides a chaotic environment complete with foreign sights, smells, sounds and civilian role players to intensify the training.

“It’s easy for a lot of guys who are new to this to be distracted and become overwhelmed by the chaos of this training,” Kretchman said. “Today’s drills were very thorough, and my team learned a lot of important lessons from the realism presented by this type of scenario-based training. In these types of 360-degree environments, it’s important that you stay cognizant of your surroundings and keep communication links strong.”

By conducting training at the IIT, U.S. Marines and partner forces gain insight into the types of environments they may face at some point in their careers, preparing them for a range of operations including urban territories where civilians are intermingled with hostiles. By learning to professionally and diligently carry out their duties in these types of situations, they build upon their core infantry training, experience combat stressors and learn from their mistakes without the threat of real danger.

Following each iteration run by the service members, the staff at the IIT present video clips and a phase-by-phase breakdown of what they did well, and what they need to improve upon.

“A big difference between the training we received today and what we have done thus far is the role players,” said Lance Cpl. Taylor Mckersie, a rifleman with 2/1. “The main goal for this type of situation, the main reason we would be doing any of this is to give the civilians peace of mind that we’re there to protect them.”

RIMPAC fosters a capable and adaptive partnership for all the forces that participate. U.S. and Mexican forces ran through the trainer with an integrated squad, July 9. This brought a new level of difficulty as the service members had to break through language barriers and different techniques. They quickly learned that sign language is an international language and together, with a little practice and rudimentary ability to speak each other’s language, they were able to successfully complete the training.