In the Life of Marines: Military Police Working Dog Handler 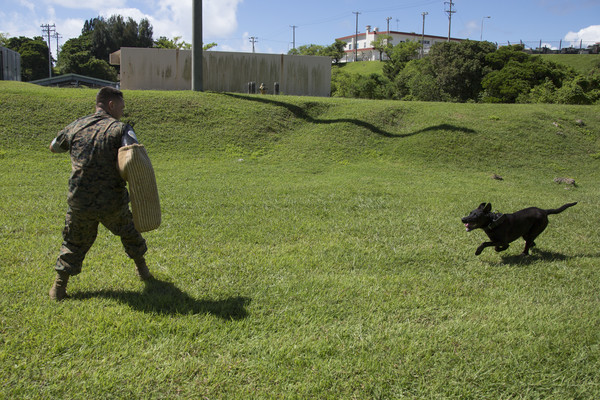 CAMP FOSTER, Japan — Military occupational specialties are the foundation of the Marine Corps. Each MOS is a cog, working with and relying on each other to keep the fighting machine that is the United States Marine Corps running. The military working dog handlers are one such dog.

Military police officers have many conditions they have to fulfill to effectively complete the mission of prevention and protection in peace and wartime. One aspect of their duty is to be handlers for the military working dogs.

“To even have the opportunity to be a military working dog handler, you have to be military police by trade,” said Cpl. Hunter Gullick, a military working dog handler with Headquarters and Support Battalion, Marine Corps Installations Pacific – Marine Corps Base Camp Butler, Japan. “We go to the school at Fort Leonard Wood for roughly three months before graduating and joining the fleet. After that you can put a package in to request the chance. This process is long since they screen you with background checks, schooling history and recommendations. If they accept you, you are sent to Lackland Air Force Base in Texas for another three months of school, this time strictly for military working dog handler training.”

The tradition of using dogs during war dates back thousands of years, but the U.S. military did not officially have military working dogs until World War I. Since that time the partnership between the canines and their human has grown.

“We utilize the dogs for a number of thing,” said Cpl. Garrett Impola, a military working dog handler with Headquarters and Support Battalion, MCIPAC. “The dogs are trained for substance location, tracking, and explosive device detection. During festivals and events we use them as security to do sweeps and to detrude conflicts. No other single MOS can do everything our dogs can.”

The handlers spend most of their working day with their partner to keep at top performance. This can be both a struggle – as much as it is a joy – for the Marine partner.

“The best part about my job is the dogs, for sure,” said Gullick. “They give everything they have to you, so we give everything to them in return. The most challenging aspect of my job would be that sometimes the dogs are like kids. It can get frustrating so you have to have patience. You also have to be humble because as a handler you have to be able to take constructive criticism.”

The Marine and military working dog are a team. The job of being a handler is always a work in progress. Marines are encouraged to push their limits and learn more when it comes to doing their jobs. They are always learning new techniques and procedures when it comes to performing their job to the best of their abilities.

“You will never know everything because each dog is different,” said Gullick. “With one, you think that you have the dog world figured out and then another one comes along and throws a curve ball at you. You have to continually learn and adapt.”

Face of Defense: Guard Soldier’s Experiences Put Her Ahead of Civilian Peers