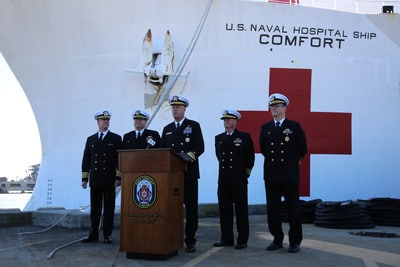 Comfort’s return to Norfolk signifies the conclusion of an 11-week medical support mission to the region as part of U.S. Southern Command’s Operation Enduring Promise initiative.

“The men and women on USNS Comfort, representing the best of the United States Navy and our nation, treated over 26,000 patients and conducted approximately 600 surgeries aboard the ship and at land-based sites,” said Rear Adm. Sean Buck, Commander, U.S. Naval Forces Southern Command. “Their work made a big difference in Central and South America in ways both concrete and intangible for years to come.”

Comfort’s embarked medical team worked with health and government partners in Ecuador, Peru, Colombia and Honduras, providing care both aboard the ship and at land-based medical sites, helping to relieve pressure on national medical systems caused partially by an increase in cross-border migrants. The deployment reflected the United States’ enduring promise of friendship, partnership and solidarity with the Americas.

“This deployment reflects the United States enduring promise of friendship, partnership and solidarity with our partners in the Americas,” added Buck.

The ship’s crew included more than 465 U.S. and partner nation military doctors, nurses and corpsmen. In addition, about 90 medical and dental professional volunteers from non-governmental organizations were aboard to support the medical assistance mission. The mission was supported by a team of approximately 70 of Military Sealift Command’s civil service mariners who oversaw the ship’s operation and navigation. During the mission, USNS Comfort visited Esmeraldas, Ecuador; Paita, Peru; Turbo, Colombia; Riohacha, Colombia; and Trujillo, Honduras.

“We had an opportunity to work with all of our friends and partners in the region and provide amazing care for a lot of folks who really needed it,” said Capt. William Shafley, USNS Comfort’s mission commander, “The mission could not have been successful if we had not worked as a team. We feel the mission was a tremendous success and we are all very proud of the work we have done.”

“Our team did a great job working with partners from 11 different countries and non-governmental organizations,” said Capt. Kevin Buckley, commanding officer, USNS Comfort Medical Treatment Facility. “The team really came together during this deployment and used all of our skills while working with our partners to the south. As a professional, working with everyone on this deployment was truly an awesome experience.”

During the port visits, Comfort’s medical team conducted a variety of surgeries including cataracts, hernias, cleft palates and more. Additionally, Comfort hosted approximately 1,000 distinguished visitors and guests during 53 distinguished visitor and media days to include the President of Honduras and Prime Minister of Peru.

“To the Enduring Promise Team and the USNS Comfort, congratulations and thank you for demonstrating America’s enduring concern for our neighbors to the south,” said U.S. Secretary of Defense James Mattis in a message to USNS Comfort’s crew. “As you return home, you carry the thanks and respect of those you treated in Ecuador, Peru, Columbia and Honduras. In a world awash in change with displaced populations, fragmented relationships and great power competition, your deployment delivered a sense of concern and humanity amidst chaos.”

The USNS Comfort’s Enduring Promise mission demonstrated U.S commitment to the Americas and is part of a continuum of support provided by U.S. Southern Command (SOUTHCOM). SOUTHCOM sponsored civic assistance and humanitarian missions were conducted in close cooperation with partner nations in the region as well as with U.S. interagency partners at the U.S. Department of State and USAID. Similar missions include Continuing Promise, New Horizons, Beyond the Horizon, medical readiness training exercises and the Medical Civil Action Program.

This mission marked the sixth time the hospital ship has provided medical assistance in the region. Since first deploying to the region on a similar mission more than a decade ago, the hospital ship has visited 18 nations in the Caribbean, Central America, and South America. During those missions, military medical professionals worked with host nation and civilian partners to provide medical treatment to nearly 390,000 people, including more than 6,000 surgeries.

A U.S. Navy hospital ship has the capacity to provide afloat, mobile, acute surgical medical facilities to the U.S. military, and is an optimal platform to provide hospital services in support of U.S. humanitarian assistance and disaster relief operations worldwide.

SOUTHCOM is one of the nation’s six geographically focused unified commands, with responsibility for U.S. military operations in the Caribbean, Central America and South America.