They say that “a picture is worth a thousand words.” So, when it comes to documenting Coast Guard operations – past, present and future – imagery is indispensable in their ability to tell our story.

Throughout our service’s history, photos and videos of our operations have told the Coast Guard story to the American people, creating a lasting legacy of our enduring value to the nation. From our participation in armed conflicts as one of the Armed Forces of the United 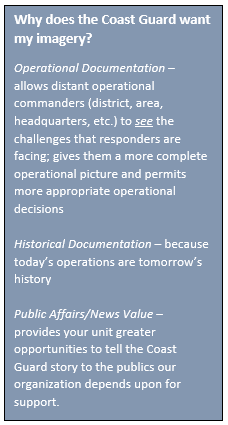 States, to our humanitarian responses to both natural and manmade disasters, to our efforts to rescue those in peril – imagery tells a story better than words alone ever could.

Since the advent of digital imagery several decades ago and the proliferation of smartphone cameras after that, Coast Guardsmen from every field have been encouraged to capture their own imagery. After imagery is captured, it can be reviewed and officially released by an appropriate authority, contributing to the history of our service.

That’s why the Office of Public Affairs at Coast Guard Headquarters is announcing the launch of a web-based imagery distribution system that allows you to have an active role in capturing photos and video of your unit’s operations and activities.

Dubbed the Coast Guard’s Visual Information Management System (VIMS), the system allows individuals to transfer unclassified imagery to their servicing public affairs office for review and appropriate action. Once received, imagery may be used in one or more traditional public affairs products – news releases, feature stories, blog posts, social media posts, etc. It may also be added to the Coast Guard’s repository of official imagery at the Defense Visual Information Distribution Service, ensuring its eventual transfer to the National Archives and Records Administration.

The Coast Guard’s External Affairs Manual, COMDTINST M5700.13, lists the public affairs responsibilities of commanding officers and officers in charge, among them “ensuring all significant operations are documented to the extent allowed by safety and operations.”

Therefore, before capturing imagery of a unit operation or activity, ensure:

Several training documents are available on the VIMS Portal Page, including a user guide, job aid and FAQ.

Contact your servicing public affairs office for more information on how you can contribute to telling the Coast Guard’s story with imagery of your unit’s operations and activities.