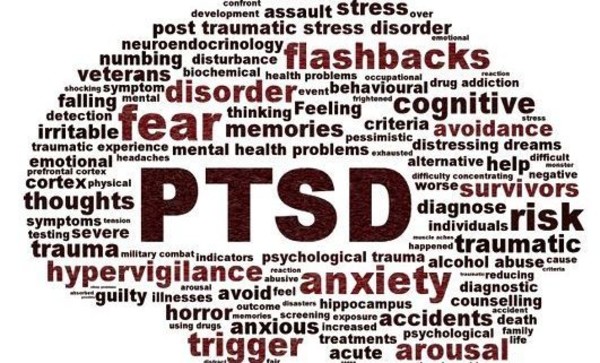 “Records show roughly 40,000 troops have been diagnosed with PTSD since 2003,” Maher said. “Officials believe there are many more which go unreported or undiagnosed.”

This mental health condition can develop after someone experiences or witnesses a life-threatening event, Maher said. Although PTSD can be caused by a variety of experiences, these are some of the most common causes:
• Combat
• A car accident
• Sexual or physical assault
• Child sexual or physical abuse
• Natural disasters such as fires, hurricanes, earthquakes
• Terrorist attacks
• Learning about the violent or unexpected death of a loved one

“The vast majority of people I’ve counseled or come into contact with who were diagnosed with PTSD were not involved in combat, but were civilians who experienced serious trauma as a child, such as serious abuse, or as an adult who experienced something like a sexual assault,” said Carla Torres, New Parent Support Program manager with the Family Advocacy Program at Behavioral Health.

Symptoms and triggers vary, depending on the individual and their unique reaction to whatever trauma they have experienced, Maher explained. Some of the symptoms include strong and unwanted memories of the event, nightmares, emotional numbness, intense guilt or worry, angry outbursts, feeling “on edge,” an exaggerated startle and avoiding thoughts and situations that are reminders of the trauma.

“PTSD can be described as a type of avoidance disorder,” Maher said. “The person may strive to avoid situations or experiences that cause them to relive the traumatic event.”

Although it is normal for people to experience upsetting memories, to feel on edge, or to have trouble sleeping after a traumatic event, most people start to recover over weeks or months, especially with some form of counseling or therapy.

“For some, PTSD is compounded by additional factors such as anxiety, depression, or perhaps alcohol and drug use disorder,” explained Dawn Dialon, substance abuse counselor with Behavioral Health. “The array of symptoms and complicating factors makes it common for people suffering from PTSD to also have problems at work, in relationships, or with physical health.”

Through a series of counseling and psychological examinations, the trained professionals at Behavioral Health are able to diagnose and offer effective treatment options for many of the complicating factors. For instance, if someone is having relationship difficulties, they may benefit from family counseling, explained Maher. Another example is their ability to help reduce anxiety someone may be experiencing after a traumatic violent event through developing more effective coping techniques.

“Episodes of intense anxiety and being stuck in a state of hyper-vigilance is common in many people with PTSD,” Maher said. “Although we don’t directly treat PTSD itself, we can link service members to resources that treat PTSD directly while we can help with many of the symptoms or contributing factors such as intense episodes of anxiety, or withdrawal and depression, responses which may be out of proportion to situations, by helping the service member identify and challenge irrational beliefs.” Some of the cognitions and behaviors may have been necessary for survival in a war zone but are not a good adjustment in civilian life.”

Some of the treatment options include Cognitive Behavioral Therapy designed to develop new methods of thinking and coping with triggers for PTSD. In addition, BH staff offer individual or family counseling, and offer a variety of other support options.

“Another treatment option available is Eye Movement Desensitization Reprocessing developed by Francine Shapiro Ph.D.,” Dialon said. She and Maher are both trained to use this technique. “It is a form of psychotherapy that enables people to heal after a traumatic event.”

The overall goal of treatment is to help a person function better, and experience less anxiety, Maher explained. Other benefits include better sleep, and improved relationships.

“It doesn’t get better if you ignore it,” Dialon said. “It will only get worse. Life has traumas.”

Some of the techniques such as EMDR, Cognitive Behavioral Therapy, and Rational Emotive Therapy have proven results. However, Dialon also notes the importance of loved ones.

“Often it is the loved one who will notice something is different in their partner’s behavior,” Dialon said. “They may notice that the person is drinking more, or just behaving differently.”

Some suggestions for the loved ones of a person diagnosed with PTSD include:
• Don’t take it personally
• Suggest therapy
• Listen sympathetically and empathetically
• Gain education about the symptoms
• Engage in self-care

“It’s also important to find supportive ways to communicate,” Torres noted. “We can help with learning those tools.”

“Some theorize that there is only so much mental energy that we can use for executive functioning, rationalizing, planning and sequencing,” Maher said. “If we are using a lot of that energy to suppress things, then it limits the amount we can use for everyday life. One of the things we talk with people about is mindfulness, and living in the here and now. We can teach them grounding techniques with sensory input in the moment, which is really effective for people. They can start using that energy for executive functioning rather than for suppression.”

“That’s what we are here for is to help people find freedom from those things so that they can live richer, fuller lives,” Maher said.

If you or someone you know would like assistance with various aspects of mental health, contact Behavioral Health staff at 577-6533.