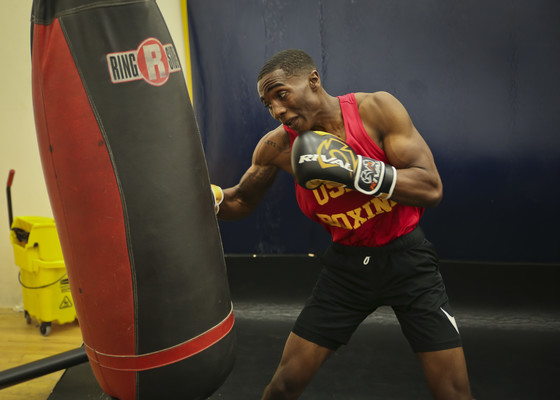 “We were invited to Camp Lejeune to fight in front of an audience of retired and current boxing legends as well as retired Marine Corps generals,” said Collins, an administrative specialist aboard the air station. “It was a great experience and we were able to learn a lot from it.”

In order to prepare for a fight, the Marines had to work on eating right and strengthening their bodies and minds.

“We are up at 5:30 a.m. just to start our first workout of the day,” said Jones, an administrative specialist aboard the air station. “We always train together to motivate each other and push each other to our limits. We like to work out three times a day to maximize our potential to grow and work on our techniques. However, working out is only part of the training. We have to watch what we eat and make sure we maintain our weight class. I lost 23 pounds just for this fight which meant watching my calorie intake and sometimes going straight to the salad bar while my friends are eating wings.”

In order to attend the fight, the Marine’s chain of command had to approve of their participation which meant sacrificing manpower in their work sections; a small price to pay to for their Marines to sharpen their warrior mindset.

“I have seen these Marines working out before work, during lunch, and after work,” said Master Sgt. James Williams, the SNCOIC of outbound for the Installation Personnel Administrative Center. “I can see the drive these Marines have and the will to fight and the will to keep fighting. As a Marine Corps Boxing Team alumni, I would be honored to see these Marines continue that tradition of excellence and hard work.”

For many Marines, playing a sport is a way of relieving stress or a good way to exercise. However, these three Marines have made boxing their life and want to keep elevating their status in the sport.

“You can play basketball, football, and soccer but you cannot play boxing,” said Collins. “When you train for boxing, it’s a whole different mentality and workout. You have to utilize your entire body instead of just specific muscle groups. When you are in that ring it’s just you and everything you have worked for. Only you bring home that victory and only you are the reason for a loss. We want to keep improving ourselves and if they stand up the Marine Corps Boxing Team again, we will be able to represent the Marines Corps and win. But for now, we are honing our craft and working toward the 2024 Olympics where we can represent not only the Marine Corps but the entire United States as well.”