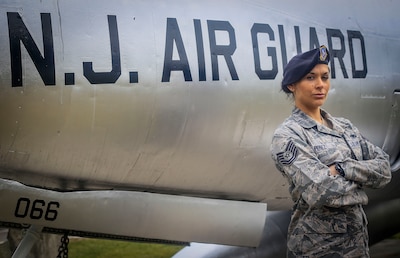 “When I was in high school, I started out as a cheerleader my freshman year,” Perez said. “At the end of my junior year they were advertising open positions on the football team, so I tried out and made it.”

Some of her classmates didn’t think she had what it takes to play football.

“I told my drill teammates I wouldn’t be back the next year because I was playing football,” recounted Perez. “They said, ‘You can’t, you’re a girl,’ and I was like, ‘What do you mean? I can do what I want.’”

Perez started out as a kicker, but soon replaced the starting safety on defense.

“I told the coach I wanted to be in a position where I could hit someone, and they let me try out for safety,” Perez said. “It was a great position, I loved every minute of it.”

As part of the New Jersey Air National Guard’s 108th Security Forces Squadron Training Office here, Perez assists airmen with getting the training they need to be deployable.

“We teach dismounted operations, military operations in urban terrain [and] call for fire,” she said. “We have to be familiar with all aspects of security forces [work], which is cool because we get to see a lot of different things.”

Perez, who is a veteran of operations in Iraq, knows the value of training security forces members firsthand.

“Making sure that our airmen are ready to deploy, that they have the knowledge and the tools that they need, that makes me feel good about being in the training office,” she said.

After a grueling course, Perez was certified as a combatives instructor, and is in charge of the program for the 108th Security Forces Squadron.

“They learn dominant positions, submissive positions — where you’re in someone’s guard — choke holds, arm bars, things like that,” she said. “The troops love it.”

When reflecting on security forces, Perez says it’s like being part of a family.

“There’s a stigma with security forces that it’s male-dominant, but it’s like being in a squadron with our brothers,” she said.

Over the past year, women in the 108th Security Forces Squadron have deployed, won numerous awards, and qualified for the German Armed Forces Test Gold Badge.

“A lot of the women in our unit are headstrong and determined,” Perez said. “I’m constantly inspired by them.”