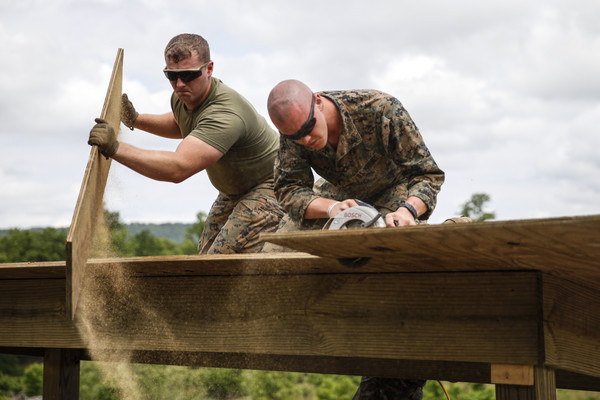 This year’s exercise is the fifth iteration of the bilateral training between 6th ESB and 131 Commando Squadron RE, a British Army Reserve unit. The Marines hosted the training this year at Fort Indiantown Gap (FTIG), Pa., United States, May 12-25.

“The fact that we have integrated the Marines and Commando’s has really given us a chance to work closely with the USMC,” said 2nd Lt. David A. Grant, Commando with 131 Commando Squadron RE, British Army. “It has been great for me to learn from an active duty Marine, and vice versa. The team dynamic that we have between the Marines and commando’s has been influential to share experience and knowledge.”

Overall, the goal was to conduct a series of ranges, defensive military operations on urbanized terrain, or MOUT scenarios, and engineer projects to meet critical ESB mission essential tasks while partnered with Coalition Forces.

“The first week started off with some infantry tactics,” said 1st Lt. Spencer P. Lamb, platoon commander with Headquarters and Service Company, 6th ESB. “We did the pistol range and tables five and six of the rifle range. Then we moved into the MOUT town with urban warfare infantry tactics.”

During the first week of training, the Marines and Commando’s conducted multiple ranges including a night range, and different scenario’s within the MOUT structures. As Marines and Commando’s worked together as one force in the scenarios, Pennsylvania’s very own Air National Guardsmen played their opposing force.

“We had to figure out what tactics we were operating from in order to be on the same song sheet,” said Staff Sgt. Callum M. Crowe, Commando with 131 Commando Squadron RE, British Army. “It’s been fantastic building a relationship with the Marines and I feel that we have integrated well throughout the training.”

Week two of the training was targeted towards the specialties of the combat engineers. Three different construction sites consisted of; constructing a bunker at a local range by digging trenches and moving cement blocks around wooden framed structures, installing flooring and repairing roofing in a warehouse, and putting up siding and completing the insulation on an old World War II barracks.

Before the Marines and Commando’s could start at their designated construction site, they had to attend a mandatory Sapper training class.

“My job was to set up and start the Sapper school,” said Crowe. “The Sapper school was one full day of training on how to properly use the power tools and equipment required for each task site. We wanted to make sure everyone was comfortable using the dangerous items, such as the nail gun, jig saw and circular saw.”

Although the exercise had some difficulties, the Marines and Commando’s were able to come up with solutions and work past these problems with ease.

There were some hick ups with timing and efficiency,” said Grant. “Much of this was out of our hands due to weather conditions. Overall, I think the exercise was a success, especially since the platoons took the initiative to fill any time gaps wisely and practice what they needed work on.”

With plans to keep this exercise going, it is important to hear the positive feedback from the participants of the exercise and what they would like to see for the future iterations.

“Next time around, I would personally like to see more combat engineer specific missions to accomplish,” said Lamb. “Such as constructing mobility and counter mobility positions and techniques, as apposed to, various small construction tasks.”

Relationships were built with interoperability in place, and that, in itself led to yet another successful iteration of exercise Red Dagger.

“I think it has been a very beneficial relationship,” said Lamb. “We have learned different terminologies and techniques from the Commando’s. We now have a different perspective on how we view mundane activities and we really started to see their perspective on accomplishing the task at hand. The Marines and Commando’s have really worked well together and learned to communicate and complete tasks on time.”