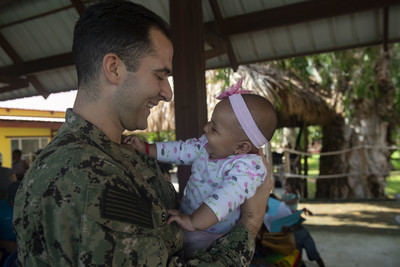 The Comfort is currently treating patients in Honduras.

A number of people who were treated are refugees from Venezuela who fled to neighboring nations, Manning said.

Medical personnel from the Comfort are making a tremendous difference on the ground, Manning continued.

“This is medical aid that civilians would not otherwise have access to,” he added. “Their presence speaks to how we see being a neighbor in the Western Hemisphere and how we see the importance of providing humanitarian assistance to those that otherwise would not have it.”

The Venezuelan health care system is all but collapsed and can’t provide aid to its citizens, Manning said. “We stand with the Venezuelan citizen during their time of need,” he told reporters. “That’s what the symbol of the Comfort means.”

The crisis in Venezuela can be resolved only by the restoration of a democratic government’s rule of law and respect for fundamental human rights and freedoms, Manning said.

Pentagon officials said two Russian heavy strategic bombers — Tupolev TU-160 Blackjacks, which can fly at supersonic speeds — are in Venezuela, along with all of the required maintenance and refueling capabilities.

Determining ‘Weather’ or not you fly