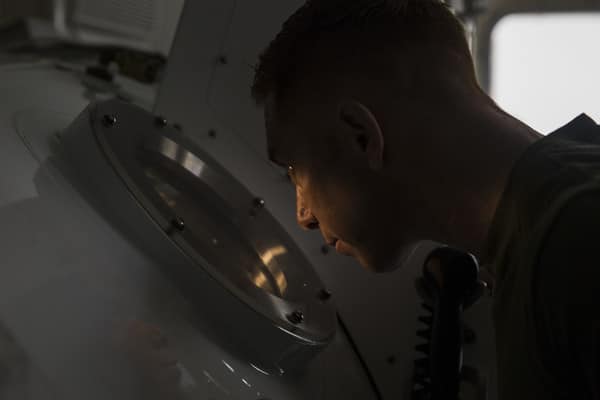 Camp Schwab, Okinawa, Japan- Air tanks, rebreathers and scuba fins sit on metal shelves lining the dimly-lit hallway of the 3rd Reconnaissance Battalion compound. Chatter, echoing through the corridor, can be heard over the distinct noise of dive gear being tested and prepared. A doorway at the end of the hallway holds a sign that reads, ‘3rd Recon Navy divers’.

Sitting on a workout ball in place of his office chair, Senior Chief Petty Officer Mark Sawyer, enthusiastically introduces himself as the most senior Master Diver in 3rd Recon.

Passing over a paper magazine titled ‘Face Plate’, the official newsletter for the divers and Salvors of the United States Navy, Sawyer smiles with a hint of pride. He asks, “What would you like to know?”

Who are the Navy divers and what do they do?

Their main task while attached to 3rd Recon is to train and maintain but if required they are ready at a moment’s notice to go on a mission.

Why are they important?

What training is required to become a Navy Diver?

The requirements for a Navy divers include being physically and mentally ready. Starting at diver preparation course, which is a 32 day long course for underwater welding and cutting. Next going to 2nd Class dive school, which is approximately 7 months long. While at this school, the divers learn everything from basic gas laws as they relate to diving to underwater mechanics and tools.

“What we do is nothing short of a calling,” said Cmdr. Hung Cao, the Naval Diving Salvage Training Center commanding officer, ‘Faceplate, Year of the Military Diver.’ “I think it’s important that Americans understand what military divers have meant to our nation’s history in times of peace and war.”