Defeat of ISIS ‘Within Our Grasp,’ Centcom Commander Says

This report originally published at centcom.mil. 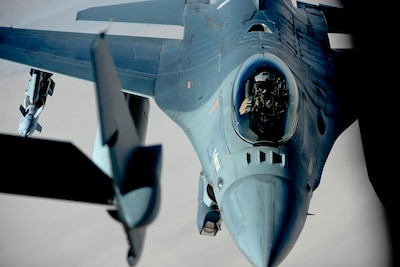 The United States and its partners have made significant progress in Iraq and Syria, but investments are needed to ensure the gains endure, the commander of U.S. Central Command said today.

U.S., coalition and local partners have made immense contributions to security in the Centcom region, the “most complex area on the globe,” Army Gen. Joseph L. Votel told the Senate Armed Services Committee in a fiscal year 2019 budget hearing.

“In the past year, we have achieved incredible success against [the Islamic State of Iraq and Syria] in both Iraq and Syria,” the general told lawmakers.

Votel commended the Iraqi security forces and the Syrian Democratic Forces for their steadfast efforts, noting they are “operating at their most effective levels.”

They have liberated over 98 percent of the territory previously held by ISIS, he said.

“The destruction of the ISIS physical caliphate is within our grasp,” Votel said.

Investments in the security forces, relationships and capabilities are needed to hold territory and ensure the terrorists do not return, Votel said.

“As we consolidate our gains in places like Iraq, Syria, Lebanon and Yemen, we remain cleareyed about the challenges that the region continues to present,” Votel said.

Bringing the defeat-ISIS campaign to a responsible close, according to Votel, would allow the prioritization of implementing the South Asia strategy in Afghanistan.

“Military success in the campaign presents us an opportunity to reposition forces from Iraq and Syria to Afghanistan in a manner that keeps the pressure on ISIS but also sets us up to break the stalemate in Afghanistan,” he said.

The South Asia strategy reaffirms the enduring U.S. commitment to Afghanistan by reinforcing the two complementary military missions — the NATO-led train, advise and assist mission and the U.S. defeat-terrorism mission, he said.

“With our support, the Afghan national defense and security forces are well postured to begin operations to seize the initiative to expand population control and secure credible elections,” Votel said.

Iran’s malign activities across the Centcom region pose a long-term threat to stability, Votel said. Centcom seeks to align military efforts with broader interagency and international activities to “neutralize, counterbalance and shape the destabilizing impact of Iran,” he said.

The National Defense Strategy, he pointed out, identifies the resurgence of great power competition as the principal national security challenge.

He pointed to Russian activities in Syria, saying Moscow’s support of the Assad regime is propping up the regime and adding complexity to the defeat-ISIS campaign.

“Moscow plays both arsonist and firefighter, fueling tensions among the Syrian regime, Iran, Turkey, the Syrian Democratic Forces, the United States and other coalition partners, then serving as a supposed arbiter to resolve disputes,” he said.

Russia’s “manipulative behavior” has placed progress at risk with activities that are not focused on the defeat of ISIS, but rather on preserving its “influence and control over the outcome of the situation,” he said.

China is pursuing long-term steady economic growth in the Centcom region and improving its military posture and force projection, he said.

China and Russia are seeking to fill perceived gaps in U.S. influence while cultivating “multidimensional ties to Iran,” Votel said.

U.S. Central Command (CENTCOM) reports are created independently of American Military News (AMN) and are distributed by AMN in accordance with applicable guidelines and copyright guidance. Use of CENTCOM and U.S. Department of Defense (DOD) reports do not imply endorsement of AMN. AMN is a privately owned media company and has no affiliation with CENTCOM and the DOD.