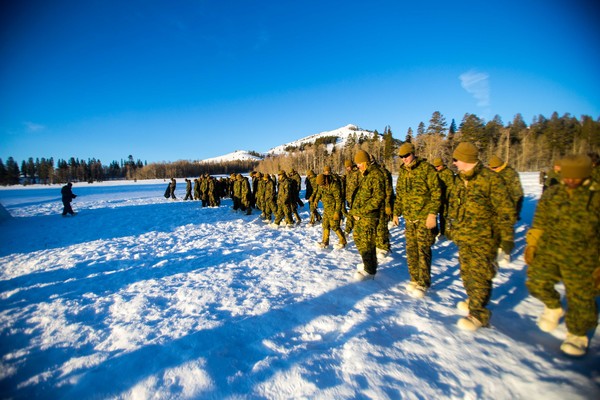 “Based on market research, industry days and events such as Modern Day Marine, we narrowed our decision for the orders down to two companies for cold weather boots and two for socks,” said Todd Towles, program analyst for the Clothing and Equipment Team at MCSC.

This effort to acquire the cold weather boots and socks will help MCSC evaluate commercial off-the-shelf solutions and offer the potential to reduce or eliminate the current environmental protection gap, said Towles. The socks will have much higher wool content than the polypropylene wool socks Marines currently use. Additionally, the Clothing and Equipment Team is hopeful the new gear will offer increased water repellency, comfort and insulation in extreme cold weather environments.

MCSC’s Program Manager Infantry Combat Equipment will conduct a field user evaluation December 2018 through March 2019. The team will gather input from Marines as they wear the ICWB and ICWS prototypes at the Mountain Warfare Training Center, Fort McCoy and Norway.

Feedback regarding fit, form and function will be collected along with how well both prototypes of the ICWB and ICWS perform in sub-zero temperatures.

“The Army is conducting evaluations with similar boots and socks, so there is potential to have some consistency with our results and products,” said Lt. Col. Chris Madeline, program manager for ICE. “Marines will keep the prototype boots through the duration of testing. Once data is collected, it will inform future acquisition decisions and allow the Corps to purchase boots and socks that bridge the gap between the existing cold weather boots.”