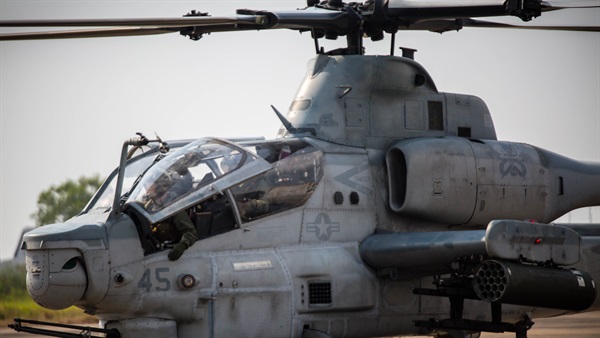 Exercise Cobra Gold 2018 is one of the largest theater security cooperation exercises in the Indo-Asia-Pacific region and is an integral part of the U.S. commitment to strengthen engagement in the region. It is intended to advance regional security and ensure effective responses to regional crises by bringing together a robust multinational force to address shared goals and security commitments in the Indo-Asia-Pacific region.

“The Marines of Marine Light Attack Helicopter Squadron 369 are here to promote multilateral training and deliver close air support for the participating nations such as the Kingdom of Thailand and Republic of Korea,” said Maj. Kevin M. Keene, an operations officer and AH-1Z Viper pilot with HMLA-369, under the Unit Deployment Program with Marine Aircraft Group 36, 1st MAW.

“The Marines of HMLA-369 ‘The Gunfighters’ are excited to participate in Cobra Gold and be here in Thailand to work with our allied and partnered nations, and we can’t wait to show the nations in Southeast Asia what the Gunfighters are capable of,” said Keene.

This exercise will improve combined responsiveness to crises in the Indo-Asia-Pacific region, and further reinforce our decades-long partnership. Also, it will test the interoperability and bilateral capability of the Thai and U.S. militaries to work together across a variety of areas including humanitarian assistance, disaster relief and a field training exercise.

Face of Defense: Sisters in Different Services Train Together