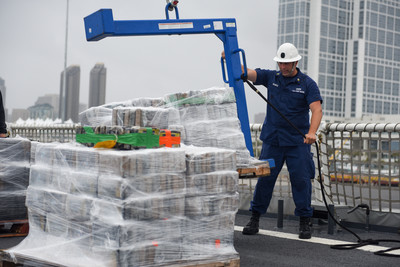 SAN DIEGO — The crew of the Coast Guard Cutter Waesche offloaded Friday in San Diego more than 14,300 pounds of cocaine seized in international waters off the Eastern Pacific Ocean from February to late March.

“The offload that you see behind me, the bales of cocaine, represents a successful example of the cycle of justice,” said Rear Adm. Nathan Moore, deputy commander of Coast Guard Pacific Area. “This cycle of justice disrupts a cycle of crime which, left unchecked, fuels violence and instability that erodes our hemisphere’s social and economic fabric and directly contributes to historically high numbers of drug related deaths in North America.”

The drugs were seized during six separate interdictions off the coasts of Mexico, Central and South America by the Coast Guard cutters Active (WMEC-618), Steadfast (WMEC-623) and Waesche (WMSL-751).

“The National Security Cutter is the Coast Guard’s most sophisticated and technologically advanced asset,” said Capt. Patrick Dougan, Waesche’s commanding officer. “However, it would be ineffective without the men and women who serve aboard. Everyone on board plays an important role and manning these ships requires everyone to contribute. This crew and those of our other assets are relentless in their pursuit of professional excellence. This offload is just a small sample of our success.”

Numerous U.S. agencies from the Departments of Defense, Justice and Homeland Security cooperated in the effort to combat transnational organized crime. The Coast Guard, Navy, Customs and Border Protection, FBI, Drug Enforcement Administration and Immigration and Customs Enforcement along with allied and international partner agencies play a role in counter-drug operations. The fight against transnational criminal organizations in the Eastern Pacific requires unity of effort in all phases from detection, monitoring and interdictions, to criminal prosecutions by U.S. Attorneys in districts across the nation.

The Coast Guard increased U.S. and allied presence in the Eastern Pacific Ocean and Caribbean Basin, which are known drug transit zones off of Central and South America, as part of its Western Hemisphere Strategy. During at-sea interdictions in international waters, a suspect vessel is initially detected and monitored by allied, military or law enforcement personnel coordinated by Joint Interagency Task Force-South based in Key West, Florida. The law enforcement phase of counter-smuggling operations in the Eastern Pacific is conducted under the authority of the 11th Coast Guard District, headquartered in Alameda, California. The interdictions, including the actual boarding, are led and conducted by members of the U.S. Coast Guard.