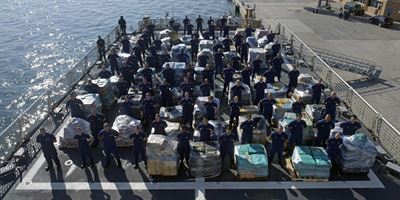 MIAMI — The crew of the Coast Guard Cutter Hamilton offloaded approximately 26.5 tons of cocaine in Port Everglades Thursday worth an estimated $715 million wholesale value seized in international waters off the Eastern Pacific Ocean since Oct. 1.

“This not only showcases the threat posed by dangerous cartels, gangs and criminal groups that make up extensive transitional organized crime networks, but it also highlights the commitment of the Coast Guard and its interagency partner’s efforts to detect, interdict, investigate and prosecute operatives for these criminal networks,” said Vice Adm. Karl Schultz, commander, U.S. Coast Guard Atlantic Area.

“Hamilton’s cargo this morning represents the combined efforts of the multi-national coalition, led by the U.S. Coast Guard, which is working to stem the tide of the narcotics trade in the Caribbean Basin,” said Commodore Craig Baines, commander, Royal Canadian Naval Atlantic Fleet. “It is a tangible example of our collective efforts to keep narcotics off our streets while at the same time promoting regional security.”

Numerous U.S. agencies from the Departments of Defense, Justice and Homeland Security are involved in the effort to combat transnational organized crime. The Coast Guard, Navy, Customs and Border Protection, FBI, Drug Enforcement Agency, and Immigration and Customs Enforcement along with allied and international partner agencies play a role in counter-drug operations. The fight against transnational organized crime networks in the Eastern Pacific requires unity of effort in all phases from detection, monitoring and interdictions, to prosecutions by U.S. Attorneys in California, on the East Coast, and in the Caribbean.

“The 53,000 pounds of seized cocaine coming off our decks today is the product of partnerships and the collaboration of U.S. Southern Command, the Departments of Homeland Security, Defense, State, and Justice and the Royal Canadian Navy,” said Capt. Scott Clendenin, commanding officer Coast Guard Cutter Hamilton. “When pursuing modern maritime smugglers, seconds count, and each of these interdictions involved a collaborative effort of joint, interagency, and international aircraft and vessels, against stealthy well coordinated fast moving smugglers.”

The Coast Guard increased U.S. and allied presence in the Eastern Pacific Ocean and Caribbean Basin, which are known drug transit zones off of Central and South America, as part of its Western Hemisphere Strategy. During at-sea interdictions in international waters, a suspect vessel is initially located and tracked by allied military or law enforcement personnel. The interdictions, including the actual boarding, are led and conducted by U.S. Coast Guard men and women. The law enforcement phase of counter-smuggling operations in the Eastern Pacific are conducted under the authority of the 11th Coast Guard District headquartered in Alameda.

The cutter Hamilton is returning to homeport Friday at the Federal Law Enforcement Training Center in Charleston. Members of the media are invited to attend for opportunity to record footage of the Hamilton’s return to port and to conduct interviews. Find more information at http://d7.uscgnews.com/go/doc/4007/2908330/