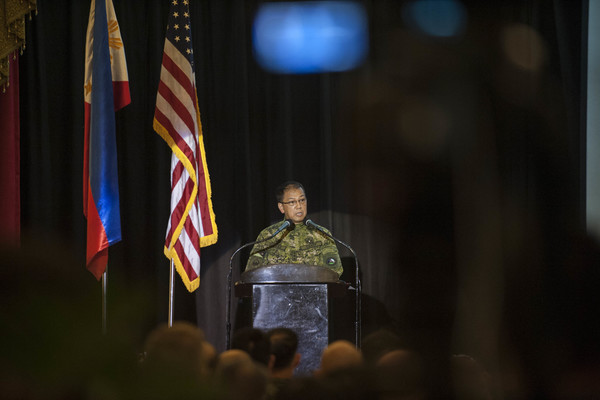 CAMP AGUINALDO, Quezon City, Philippines —Balikatan, a Filipino term meaning “shoulder-to-shoulder” or “sharing the load together” characterizes the spirit of the exercise, focusing on the U.S. – Philippine partnership and commitment to the mutual defense treaty.

This marks the 34th year for the annual exercise and will focus on a variety of missions, including mutual defense, counterterrorism, and humanitarian assistance and disaster relief.

Lt Gen. Lawrence Nicholson, commanding general of III Marine Expeditionary Force, delivered his opening remarks, thanking those in attendance and spoke about the significance of the exercise and the strong bond forged by years of working shoulder-to- shoulder as partner nations.

“Each year, through Balikatan, we reaffirm our commitment to each other under the mutual defense treaty and conduct an array of multilateral training opportunities to help us develop as allies,” said Nicholson. “We as military are charged with being ready when our nations need us most.

This year, the Philippines and the United States will work alongside the Australian Defense Force and the Japan Self-Defense Force. The AFP and U.S. military have a longstanding relationship going back to World War II.

“Our alliance remains a key source of strength and stability in the Indo-Pacific region. It is paramount to recognize that Balikatan is a training opportunity that will test and enhance our readiness while strengthening the bond between our nations.”

Armed forces of the Philippines (AFP) Lt. Gen. Emmanuel B. Salamat, exercise director for BK18 said, “I’m greatly honored to stand side-by-side with our U.S. military counterpart to share our mutual responsibility and commitment in making this Phil-US bilateral exercise a success. We extend this commitment to strengthen our alliance and learn from both forces to improve our interoperability.”

By training together, the U.S. military and AFP build upon shared tactics, techniques and procedures that will enhance readiness and response capabilities during real-world challenges.

“By the end of Balikatan, we expect our respective troops, both from the AFP and U.S. armed forces to learn from each other, not only from the training itself but also from the hard-earned experience of both our forces,” said Salamat. “May this exercise add value not only in the spirit our US-Phil Mutual Defense Treaty engagement and friendship of our armed forces, but also in our commitment to better perform our mandate in protecting our people and state.”