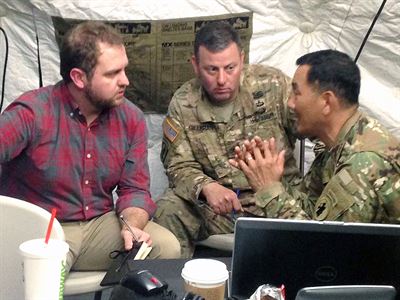 This year’s exercise began July 29 and, in addition to the Multi-National Forces-South, or MNFS, component located in San Antonio, was conducted simultaneously in Miami, Fla.; Suffolk, Va.; Davis-Monthan Air Force Base in Tucson, Ariz.; and in Santiago, Chile.

Commonly known as PANAMAX, the exercise brings together sea, air and land forces in a joint and combined operation focused on defending the Panama Canal from attacks by a violent extremist organization, as well as responding to natural disasters and pandemic outbreaks in various locations.

“We have indicated that the experiences and knowledge that the different countries bring and share during this exercise improves interoperability as a while force,” said Peruvian Brig. Gen. Miguel Balta, PANAMAX MNFS deputy commanding general. “It also improves our relationships, friendships and capabilities to support regional partners should the need arise.”

PANAMAX first began in 2003 with three countries, Chile, Panama and the United States, and originally focused solely on the maritime security of the Panama Canal. Since that time, the exercise has grown to become the region’s largest coalition command post exercise.

This year, a total of 19 nations joined the United States during the seven-day exercise that used simulations to command and control multinational notional sea, air, special operations, cyber and land forces to defend the vital waterway and surrounding areas against threats from violent extremism and provide humanitarian relief.

This year’s PANAMAX exercise marked significant contributions from partner nations, as each of the land, sea and air commands were led by non-U.S. contingents in Chile, Peru and Colombia, respectively.

“What’s key in the relationships and the trust we build with our partner nations,” said Maj. Gen. K.K. Chinn, Army South commanding general. “We are building that interoperability. We are working as a team and we have senior officers from other countries in key leadership positions.”

“Everyone brings something to the table,” said Capt. Meghan C. Kalliavas, PANAMAX joint operations center intelligence battle captain. “I think it’s beneficial for everyone to see how the others operates.”

PANAMAX has evolved over the years and now includes training for many of the 21st century threats encountered in today’s land, sea, air and cyber environments. The exercise aims to increase the ability of nations to work together, enable assembled forces to organize as a multinational task force and test their responsiveness in combined operations.

The Panama Canal is considered one of the most strategically and economically crucial pieces of infrastructure in the world. Six percent of the world’s trade travels through the canal every year, accounting for roughly 400 million tons of goods.

It is crucial to the free flow of trade worldwide, officials noted, and the region’s economic stability is largely dependent on the safe transport of several million tons of cargo through the canal each year.