Army participates in a helo lift of ITB students 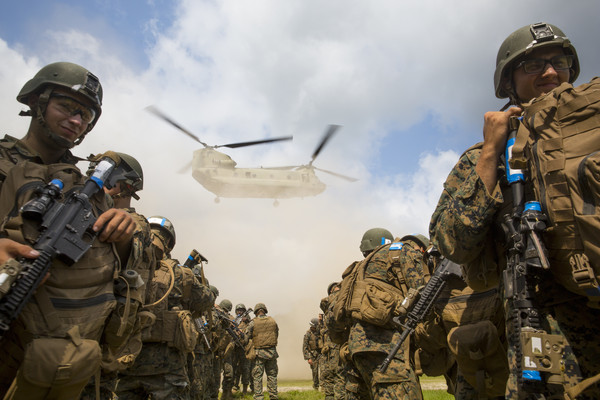 This exercise was supported by CH-47s and Soldiers from 3-82nd General Support Aviation Battalion, Fort Bragg.

“The big thing for us at ITB is prepping that Marine for the next stage in their career in the operating forces regardless of rank,” said Capt. John Fuoss, operations officer for ITB, SOI-E. “We don’t want the first time a Marine sees a helicopter to be in combat when they’re being shot at. We want to make it happen here, in training, a controled environment, under the tutelage of the experienced combat instructors.”

As the helicopters landed the excitement was visible on the faces of many Marines.

“We are getting extracted on helicopters from the Army back to Camp Geiger,” said Pfc. Paul Ibrahim, student with Bravo Co, ITB-E. “I’m looking forwards to this; it will be really nice to get that experience before I go to the fleet.”

After a few safety briefs, the students broke into groups and practiced loading and unloading from the birds under the instruction of their combat instructors and the Soldiers.
“It is good to get them the reps in and the practice under your belt,” said Staff Sgt. Caleb Cinnamon, combat instructor and platoon sergeant with 2nd platoon, Bravo Co., ITB, SOI-E. “If we didn’t do this today some of the students could be a corporal or sergeant by the time they get on their first bird.”

During the exercise, the combat instructors were responsible for the communication between the ground element and the aviation.

“Not only are the privates and private first classes going through the period of instruction getting the familiarization with a working aircraft and aviation crew, but our instructors are getting good practice working with aviation assets,” said Fuoss. “They are the ones talking to the aviators, controlling that asset and working on that relationship between the supporting and supported.”

After the Marines had their briefs, their groups loaded onto the CH-47s and were extracted to LZ-15 on Camp Geiger. When they landed the Marines broke into two flanks to provide security on either side of the bird.

“The ability of the Marines to ingress and egress swiftly and safely on and off the CH-47 is paramount to the success of their mission and the Army Aircrews they will be working with,” said Chief Warrant Officer 2 Jereme R Stratton, CH-47F Pilot, 3-82 GSAB. “The next time these Marines have the opportunity to work with a US Army CH-47 may be during an insertion or extraction from the battlefield under a hostile fire situation.”

The training accomplished between 3-82 and ITB, SOI-East, gave the Marines and Soldiers a chance to work with other branches of service to prepare for future joint-combat operations.

“We want the Army to understand that we are here to support them as well,” said Staff Sgt. Patrick Cooper, platoon sergeant, ITB-E, SOI-E.

MWD: not your average devil dog

Dear Coast Guard Family: Tips and resources for times of deployment or seperation